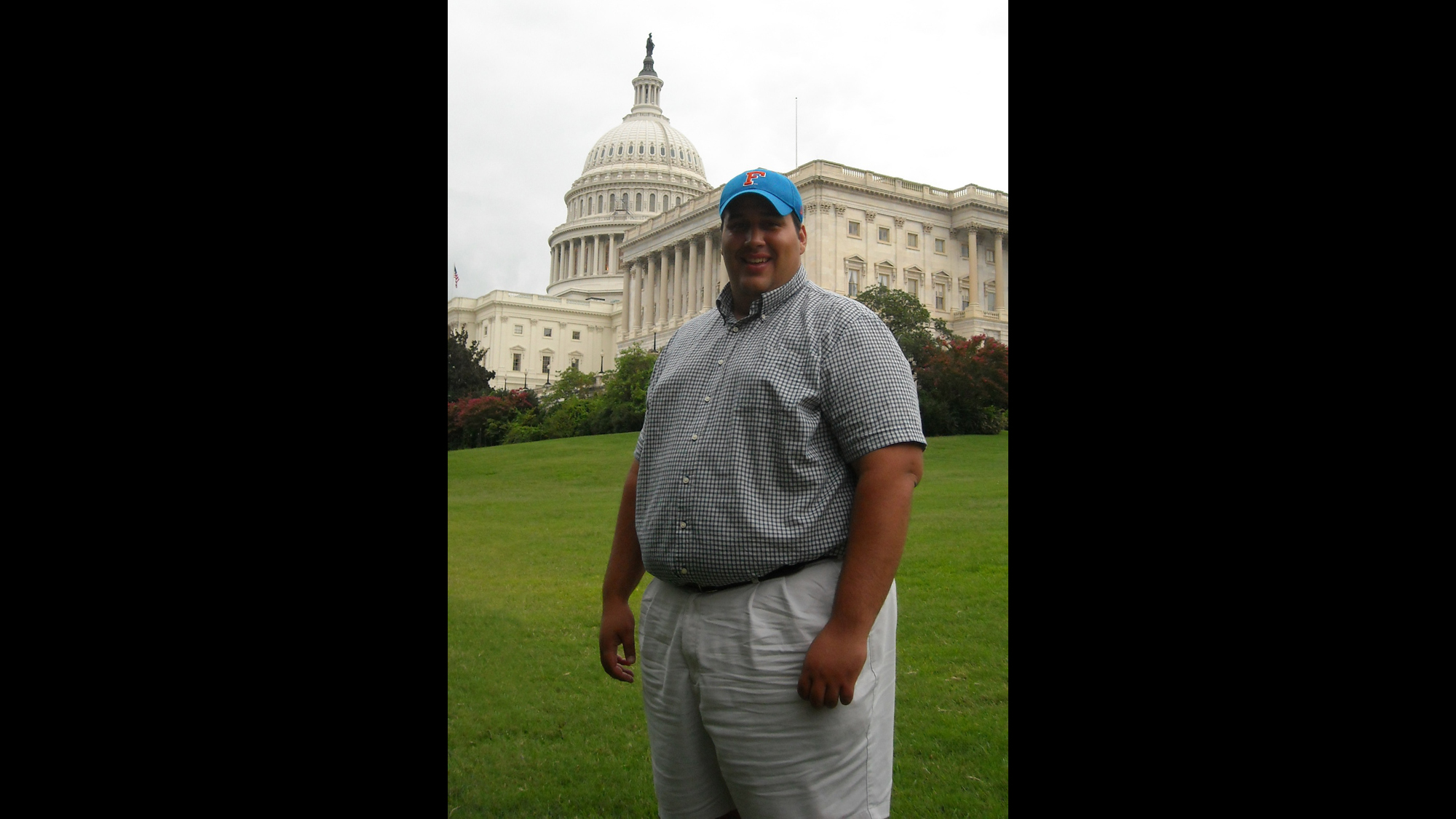 (CNN) – The table was set with an unhealthy serving of his favorite foods: fried chicken, baked beans and an extra-large helping of macaroni and cheese. For some people, alcohol and cigarettes are unhealthy vices. For Ben Boukari Jr., food was his addiction.

“To me, food was like a best friend after a long day at work,” Boukari wrote in his CNN iReport.

It was September 2010. At 6-foot-3-inches, Boukari weighed 379 pounds. His waist was 52 inches around and he was already outgrowing his 3XL shirts. He had always been overweight, a trait that earned him the nickname “Big Ben” from his friends in grade school.

He likes to say he had a “signifi-can’t” weight problem.

“I would tell myself I’m going to enjoy eating this weekend, but come Monday, I will make my lifestyle change. I must have made myself this promise hundreds of times.”

Just a few months earlier, at 26, Boukari had been the youngest official ever elected to the Alachua City Commission in Florida. He was serious about his promise to serve his community, but he somehow couldn’t keep the promises he had made to himself.

That afternoon, while Boukari sat eating his usual oversized lunch at his older brother Bryan’s office, his brother looked at him and served up some tough love.

“How can you take care of people’s business if you can’t take care of yourself?” Bryan remembers saying. He worried that his younger brother’s political accomplishments would be overshadowed by his obesity.

His words made Boukari think about how others perceived him.

“No one wants to be overweight,” Boukari said. “I didn’t want the public to see me like that. … That very moment has changed my life.”

Boukari decided he would keep his promises this time, and the next day began his journey toward a healthier future.

He started by dramatically changing his eating habits, switching to a diet low in carbohydrates and limiting himself to smaller portions. He cut out sugar and consumed just 20 carbs per day, primarily eating vegetables and meat. On a typical day, he had boiled eggs for breakfast, a grilled chicken salad for lunch, and a steak with vegetables for dinner.

Boukari also made it a point to avoid stepping on a scale. He knew his weight loss would be a slow journey and refused to be discouraged by a number.

“The first three months were the hardest,” he said. “You’ve got to believe it’s going to work.”

That belief helped Boukari push past what he called the “wall.” Before he knew it, sticking to the diet was natural. Despite having a sweet tooth, Boukari said he never “cheated” and he means never – Boukari refused to eat his own birthday cake for two years.

“You will have friends that will say you deserve a cheat day. No you don’t,” he said. “You cheat when you have reached your absolute goal.”

After nine months of hard work and extreme discipline, Boukari decided to step on the scale in June 2011. He had lost 90 pounds.

“I was ecstatic,” he said, surprised that he weighed less than 300 pounds, a number he hadn’t seen since his freshman year of high school. The weight loss gave him a boost in confidence and a sense of achievement he hadn’t felt since being elected city commissioner.

But after a few more months of dieting, the scale barely budged.

It was time for him to switch things up.

When a friend invited Boukari to work out with him in October 2011, he decided to integrate exercise into his routine, knowing that he couldn’t quit if he had a partner who expected him to show up.

“When I make a promise, I keep it. Telling him I would be there locked me into going.”

Boukari honored his promise and four days a week, he and his friend got together at the local high school’s track to exercise. The high intensity routine was brutal at first. They were doing 50 yards of lunges, 50 yards of backpedals, sprinting for 50 yards and power walking one mile around the track to help him reach his target heart rate.

Up to that point in his life, Boukari hadn’t even managed a single push-up.

To stay motivated, he turned the compliments from his friends, family and peers into fuel — fuel to get him through his tough workouts, to curb his cravings and to keep the promise he made to himself to lose the weight and keep it off for good.

“Every single day since 2011, someone has made a comment regarding my weight loss. That person had no way of knowing at the time, but it was this positive encouragement that kept me going,” he said.

After just one month, his hard work and diligence started to pay off. In November 2011, Boukari did his first push-up.

“My body was changing and the weight was just coming off.”

He stuck with his new exercise regimen and by May 2012, Boukari had lost another 50 pounds. He was down to 234 pounds, had dropped 14 inches off his waist, and tossed out his 3XL shirts to make room for his new size: large.

In order to satisfy his sweet tooth, Boukari has become the master of finding alternatives that satiate his cravings without compromising his progress. A piece of sugar-free candy, a low-carb dessert or diet soda is enough to do the trick. To compensate for these treats, he increases physical activity and keeps the portions extra small.

The city commissioner takes pride in his new self-image, acknowledging that the weight loss has made him care more about himself. These days, his weight fluctuates by 10 or 15 pounds — today he weighs about 250 — and he says he would like to lose another 25 to 30 pounds. After that, he expects to work on maintaining his weight loss the rest of his life.

“We are all very proud of Ben for putting his mind to this goal and continuing to achieve it every day,” said Boukari’s older brother Bryan. “He’s still Big Ben, but he’s just big in a different way now; he’s got a big personality.”