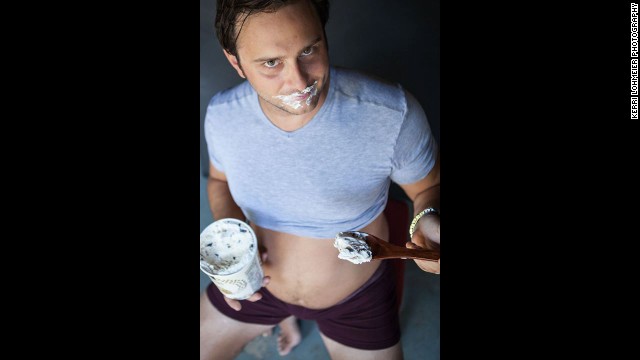 (CNN) — Justin Sylvester’s wife is pregnant. With a baby.

I’m told that’s how it works.

Mind you, this isn’t Justin’s first baby rodeo. This is the second child for him and Meghan. Another daughter.

Of course, now, Justin and Meghan are at that age (both 31) where your social media feed becomes a shameless, cascading waterfall of friends’ baby photos and professional maternity shoots — these gentle little reminders that maybe we ain’t that young anymore.

Plus, the occasional Instagram update confirming, yes, your college roommate, Diane, apparently had pasta for dinner.

There’s still a lot of that, too.

So, being that this is what people seem to do when there’s a bun in the oven, Justin asked Meghan if she was interested in having photos done to commemorate the pregnancy of their soon-to-be daughter, Ruby June Sylvester.

“I was studying for my accounting exam and the idea popped in my head that it would be funny if I took them since she didn’t want to.”

He laughed about the idea for a couple of days, and finally called up his photographer friend, Kerri Lohmeier. This would be Justin’s surprise present to his wife. All he needed were some Superman underpants and maybe a pair of Meghan’s Lululemon shorts to achieve the “full maternity effect.”

Plus a few other odds and ends. You know. Props.

“It was very unusual,” she says. “It’s never happened.”

But, as a true, seasoned professional, she embraced the weirdness, and promptly gathered the aforementioned props.

I don’t know much about being pregnant, but I suppose it somehow makes women eat like Jerry Garcia.

To be fair, it actually sounds quite nice.

Of course, in reality, pregnancy is a grind. And in some very minor way, Justin got a little taste of what it’s like.

“By the end of the shoot, my stomach hurt, and my lower back hurt. I feel as if I had a brief glimpse into the sacrifice that women make on their bodies when they become pregnant.”

Granted, he was doing a lot of pushing to get that gut out. Despite gaining 15 pounds of “sympathy weight” since injuring his shoulder doing CrossFit, Justin swears his belly’s not really that big.

But there’s a fair amount of Abita Strawberry Harvest Lager and Austin’s Pizza that says otherwise.

Naturally, everyone got a kick out of Justin’s photos. And, by this point, it might literally be EVERYONE.

Reality kicked in when a friend called him to say he had just seen the photos on the website for Cosmopolitan.

Yes, things move pretty fast when you make little hand hearts over your belly. And you’re a dude.

Still, Meghan is his No. 1 fan. And his dad is right up there, too, having left him a fatherly voice mail that said, “You are crazy, boy. The world could use a little laughter right now.”

And trust me. The world is laughing.

I mean — that belly. It’s beautiful.

Speaking of which, Justin says his favorite photo is the one where he’s kissing his stomach — that it was the perfect amount of funny and creepy.

And the one he’s most embarrassed by? That would be the black and white one where he’s on the bed. He told me, “It looks so real.”

Justin says the hardest part was actually keeping a straight face. But, he managed, and it’s all been worth it.

Maybe even REALLY worth it.

He says, “I have publishers calling me for book ideas, people wanting to buy my photos.”

But, truthfully, there’s just one thing he wants.

“I’m still holding out for an ice cream sponsorship!”

Editor’s note: Each week in “Apparently This Matters,” CNN’s Jarrett Bellini applies his warped sensibilities to trending topics in social media and random items of interest on the Web.