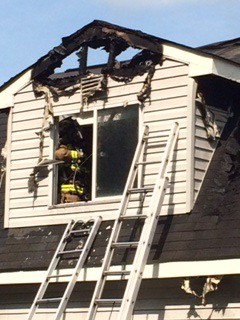 Suffolk Fire crews were able to extinguish a fire in an unoccupied home in the 7100 block of Crittenden Road on Monday morning.

According to a release, Suffolk Fire & Rescue and Suffolk Police responded to the fire just before 10:00 a.m.

The fire was in the second story addition over the attached garage of the home. It did not spread into the living quarters.

Firefighters were able to get the fire under control by 10:22 a.m. No one was injured.

The cause of the fire is currently under investigation by the Suffolk Fire Marshal’s Office.