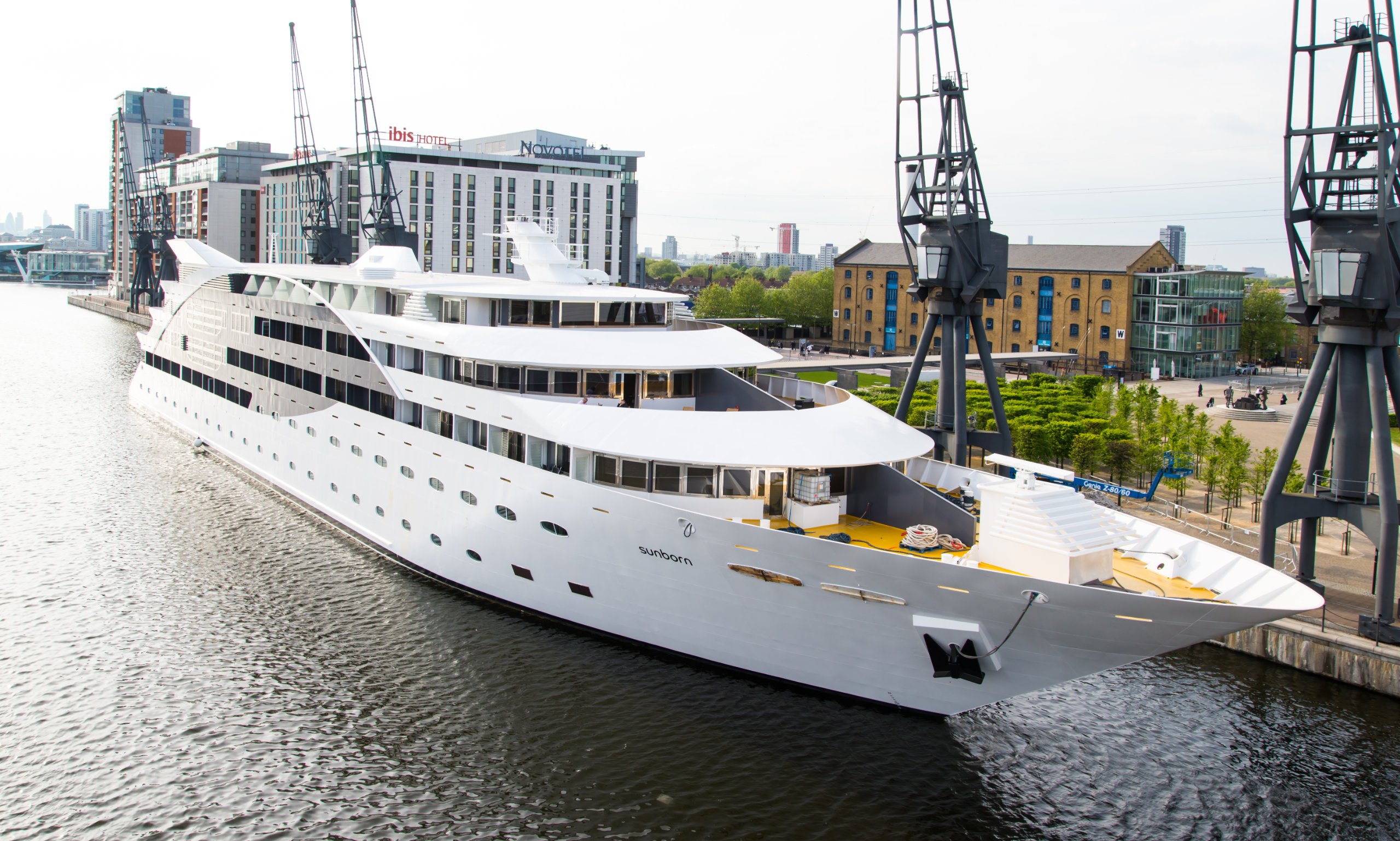 (CNN) – London’s new superyacht hotel is so enormous that when it first arrived in the city, authorities had to lower the water level by five meters just to fit it under a bridge.

They even took the mast off the whopping vessel so it could squeeze underneath a motorway, with a gasp-inducing five centimeters to spare.

The mast has now been reattached — not that this five-storey floating hotel is going anywhere soon — it doesn’t even have an engine.

“It took two weeks to tow it here from Finland,” explains Elzbieta Nowacka, Sunborn events and sales manager, during a tour of the 102-meter-long boat.

“To install an engine would have cost another £25 million ($44 million), so it was built without one on purpose.”

The swanky superyacht now sits on the banks of east London’s Royal Victoria Docks, and come late August it hopes to open its 136 rooms to the public, costing between $300 and $1,600 per night.

Originally floating in conjunction with a luxury spa hotel in Finland, the vessel was giving a refurbishment and tugged to the UK — at a total cost of $67 million.

“You cannot refer to these room as simply cabins,” says Nowacka, opening the door to one of the top-of-the-range executive suites, featuring its own sauna and balcony big enough for 20 people.

“Not everybody can afford to go cruising on a superyacht, so this is a way of giving them a taste of how it could be.”

Stepping inside the plush lobby I’m greeted with a golden staircase, the twinkling light from the water outside reflected on its buffered surface.

“A lot of people say it reminds them of the Titanic staircase,” says Nowacka.

“We’ve had quite a few requests from clients for Titanic-themed events,” she adds, without a hint of irony.

In a place with some of the most expensive property prices in the world, the Sunborn Superyacht Hotel has turned its gaze to London’s many waterways — and it’s not the first European city in the company’s sights.

The company opened its $200 million Gibraltar hotel earlier this year, moored in the tiny territory located off the southern tip of Spain. There are also plans for another five-star ship in Barcelona.

“I think it is definitely the future of design, because there are so many cities with large marinas and rivers that could be used as well,” said Nowacka.

“You can see it especially in central London, where we are running out of space in terms of building new hotels.”

The London berth has been leased for the next 15 years, with views of looming skyscrapers, and the low roar of airplanes from nearby City Airport overhead.

Step out onto the decking and it almost feels as though the planes are about to land right on board, and Nowacka is quick to point out the double-glazed windows render it silent inside.

The hotel itself is attached to the land by two huge supporting arms, and connected to the electricity and sewerage mains.

“You cannot feel any movement, maybe eight millimeters, but it’s impossible to feel seasick,” says Nowacka, as we take in the view from the third-storey deck, the summer glare bouncing off the water.

Decades ago, this part of London was a very different place.

What was once one of the busiest ports in the world, had become a deserted wasteland by 1980.

So much so that the grim image of a ruined city was the perfect setting for Stanley Kubrick’s 1987 Vietnam war film “Full Metal Jacket.”

It wasn’t until the London Docklands Development Corporation redeveloped the site towards the end of the decade — including the financial hub of Canary Wharf — that the area was reborn.

“This superyacht hotel creates a new set of symbols for the area — in terms of the wealth it represents, it’s a huge change, ” said Georgina Young, senior curator at the Museum of London.

“Now it’s all about service and luxury, so it’s a very different idea of the Docklands. Much like London itself has moved from an industry economy to a service-based economy.”

Gazing across the skyline from the sunlit deck of the multimillion dollar superyacht hotel, the East End of old feels very far away indeed.