Orbital Sciences’ Cygnus cargo supply capsule that launched on the Antares rocket from NASA’s Wallops Flight Facility on the Eastern Shore on July 13th successfully burned up as it re-entered Earth’s atmosphere on Sunday, August 17th.

The capsule was filled with 3,000 pounds of garbage from the ISS and released from the International Space Station on Friday, August 15th.

The six crew members currently aboard the ISS were able to catch the fiery display on camera.

#Cygnus reentry. In 84 days @astro_reid, @msuraev and I will ride home inside such an amazing fireball! pic.twitter.com/bgYXTnZbzF 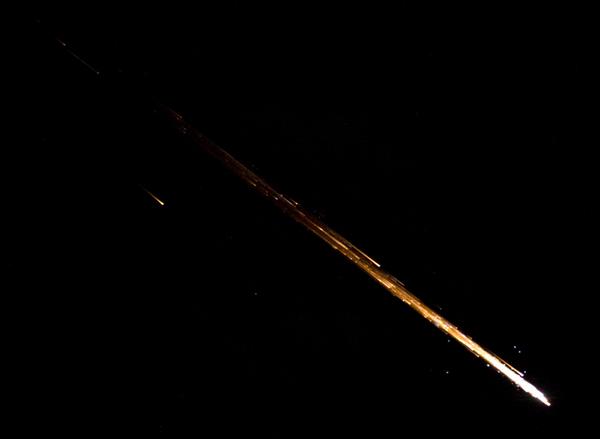 According to NASA, they’re using this event to study the mechanics of the breakup of a space vehicle. The engineering data collected can then potentially apply to the entry path of the European Space Agency’s Automated Transfer Vehicle cargo ship in January 2015.

The Cygnus capsule originally docked with the ISS on July 16th. It carried over 3,200 pounds of supplies for the station including crew provisions, hardware, computer supplies, spacewalk tools, and science and research supplies.

The crew removed the cargo and repacked the capsule with trash.

On Friday, August 15th, around 5:00 a.m. EST, the 16 bolts holding Cygnus to the ISS were removed and the cargo capsule was moved into a release position while being held by the Canadarm2 robotic arm attached to the ISS.

Cygnus was eventually released from the Canadarm2 in a series of pre-planned maneuvers to avoid collision.

As of 6:40 a.m. EST Friday, Cygnus was completely separate of the ISS, orbiting on its own. The capsule re-entered the Earth’s atmosphere over the Pacific Ocean east of New Zealand at approximately 9:15 a.m. EST marking the successful conclusion of the Orb-2 mission.

Update: Antares rocket launch from Wallops pushed back until at least July 10th

Spacecraft prepped for next Wallops launch to ISS