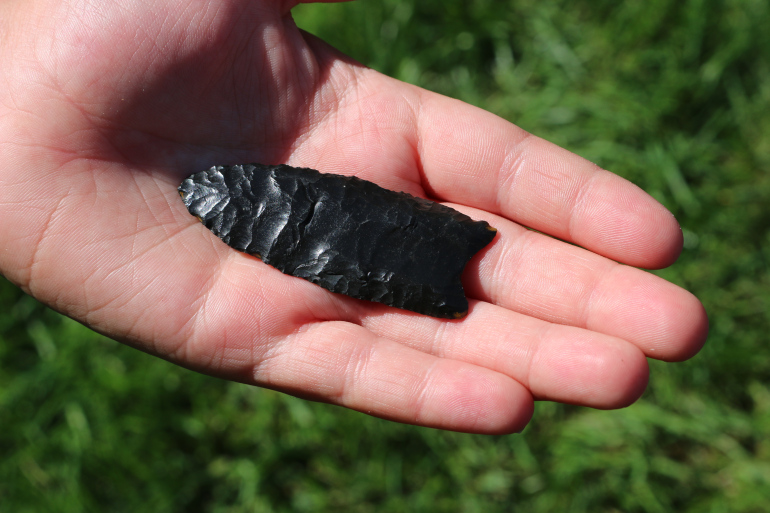 BEACH HAVEN, New Jersey — Ten-year-old Noah Cordle kicked off his summer vacation by dipping his toes into the Atlantic Ocean, only to make an ancient discovery when a sharp object hit his foot.

“It felt like a crab, so I jumped backward,” Cordle, who was vacationing with his family in Beach Haven, said.

But it wasn’t a crab, or a mussel shell as he deduced it might be next, after seeing its black color.

It was an arrowhead — one that an area expert says dates back to the Paleoindian period, approximately 8,000 to 11,000 years ago.

“A couple of people told us they didn’t think it was real,” Noah’s mother, Andrea Cordle, said of the find, which she described as being about 2½ inches long and black with a small fleck of orange along a ridge on its side.

Andrea and her husband, Brian Cordle, turned to Greg Lattanzi, the assistant curator at the Bureau of Archaeology and Ethnography at the New Jersey State Museum.

He said that most similar arrowheads have been excavated from archaeological sites in the northeastern United States rather than washing ashore.

After examining the arrowhead under a microscope, Lattanzi said it appears to be made of Jasper and Chert stone and was probably attached to a spear and used for hunting.

The Cordles, who live in Lorton, Virginia, say they plan to hold on to their treasure for a while before finding it a permanent home.