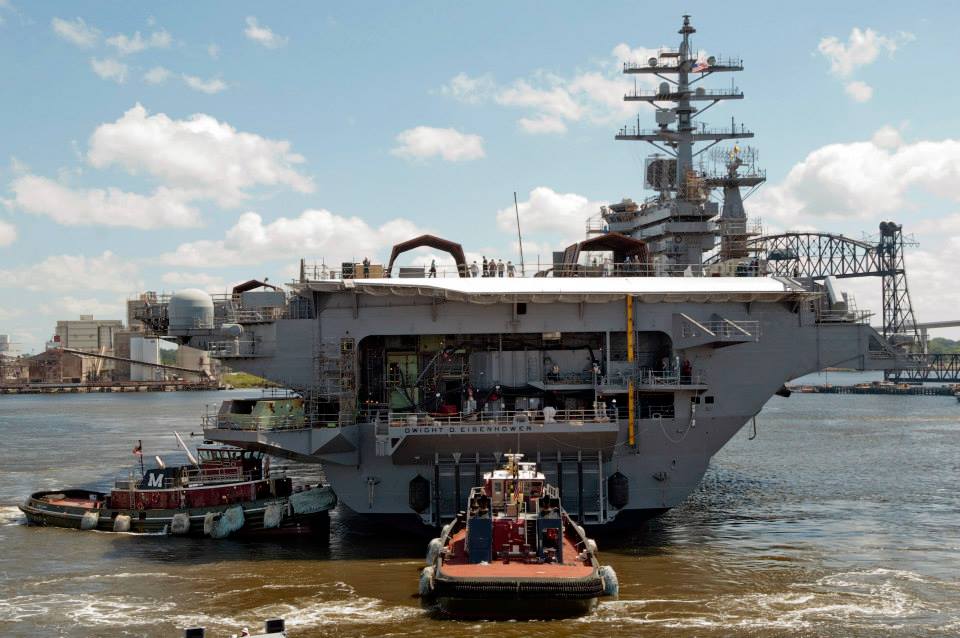 Portsmouth, Va. – The aircraft carrier USS Dwight D. Eisenhower left dry dock at Norfolk Naval Shipyard on Wednesday and moved to a pier as work continues on the carrier.

Thirty feet of water was introduced to Dry Dock 8 on Aug. 25, and the remaining space was flooded to the waterline Aug. 26.

The Ike has been in dry dock since September 2013, conducting a scheduled docking planned incremental availability (DPIA) period.

“Without the excellent work of the ship’s team leaders and zone managers, the ship wouldn’t have been ready when it was,” said Lt. Cmdr. Jeremy James, Ike’s maintenance manager. James said the ship’s force and NNSY personnel worked well together, completing approximately 12,500 jobs prior to flooding the dock.

Brian Bennett, the Ike DPIA project supervisor, said the undocking is the first of many major key events to come for the Ike project team. “Putting water on the hull and floating the ship is truly a monumental task,” he said.

Capt. Mark Bridenstine, Norfolk Naval Shipyard commander, said it was the commitment and dedication of Bennett, deputy project superintendents John Tuthill and Steve Hein, and the entire Ike team that enabled the ship to reach this milestone.

“With the undocking, the combined Norfolk Naval Shipyard, contractor and ship’s force team moves another step closer to delivery of this high-value asset back to the fleet,” Bridenstine said. “[They] have overcome significant new work and production delays, leading to this momentous event in the life of a carrier dry-docking availability. Momentum is high and focused on production completion.”

While most of Ike’s maintenance was completed during the past year, work remains to be completed in preparation for the ship’s return to operational readiness.

James said the crew’s focus will be on moving the crew aboard the ship, getting the mess decks up and running, and getting critical systems in the ship’s Reactor and Combat Systems departments fully operational for the next deployment.

Ike rested atop wooden and concrete blocks as the dock began to flood, Aug. 25. The dock was only partly flooded on the first day of the evolution to test various systems for any necessary rework.

“Having Ike back in the water is a major milestone as we progress through this maintenance period,” said Capt. Stephen T. Koehler, Ike’s commanding officer. “Not only does it allow us to do maintenance that had to wait until we were waterborne, but it gives the crew and the shipyard a very big morale boost to achieve this event.”

The next major milestone during Ike’s DPIA will be crew move aboard, which is scheduled to commence in less than a month.

“Both the crew and I are fired up to move back aboard and bring the Ike back to life,” Koehler said. “The entire ship’s force and shipyard team has worked extremely hard getting us to this point, and now we must keep up the maintenance and training focus throughout the fall to get Ike back to the fleet.”