Two soldiers receive Medal of Honor for actions in Vietnam

(CNN) – As many as 175 enemy troops killed, 18 wounds from enemy fire, 38 hours of battle, 48 hours evading the North Vietnamese troops in the bush — and one tiger. Those are the numbers behind Sgt. Maj. Bennie Adkins’ Medal of Honor, an award he received from President Obama in a White House ceremony Monday.

Adkins, of Opelika, Alabama, was honored for his actions in Vietnam’s A Shau Valley more than 48 years ago. Then a 32-year-old Sergeant First Class, Adkins was among a handful of Americans working with troops of the South Vietnamese Civil Irregular Defense Group at Camp A Shau when the camp was attacked by a large North Vietnamese and Viet Cong force on March 9, 1966, according to an Army report.

“Adkins rushed through intense enemy fire and manned a mortar position defending the camp,” the Army report says. “He continued to mount a defense even while incurring wounds from several direct hits from enemy mortars. Upon learning that several soldiers were wounded near the center of camp, he temporarily turned the mortar over to another soldier, ran through exploding mortar rounds and dragged several comrades to safety. As the hostile fire subsided, Adkins exposed himself to sporadic sniper fire and carried his wounded comrades to a more secure position.”

Later, under enemy fire, some of it coming from South Vietnamese allies who had defected to the North during the battle, Adkins took wounded troops to an airstrip outside the camp for evacuation and drew enemy fire away from the evacuation aircraft. He went outside the camp again to retrieve supplies from an airdrop that fell into a minefield. And that was just day one.

“The bottom line is that it was just not my day to go,” Adkins said in an Army interview at Fort Benning, Georgia, last week.

The fighting, and Adkins’ heroism, continued in the early morning of March 10, when the North Vietnamese hit the camp with their main attack, according to the Army report.

“Within two hours, Sergeant First Class Adkins was the only defender firing a mortar weapon. When all mortar rounds were expended, Adkins began placing effective rifle fire upon enemy as they infiltrated the camp perimeter and assaulted his position. Despite receiving additional wounds from enemy rounds exploding on his position, Adkins fought off relentless waves of attacking North Vietnamese soldiers,” the Army report says.

After falling back to a smaller bunker in Camp A Shau, Adkins killed more enemy troops with small arms fire, destroyed equipment and classified documents to prevent them from getting into North Vietnamese hands, and led a group of soldiers in digging their way out of the rear of the bunker and escaping the besieged camp.

But Adkins’ ordeal was not over. Because he was carrying a wounded comrade, he and his small group couldn’t get to the evacuation helicopters sent to pick up the battle’s survivors. The band faded into the jungle, avoiding their North Vietnamese pursuers for 48 hours.

And that’s where the tiger comes in. 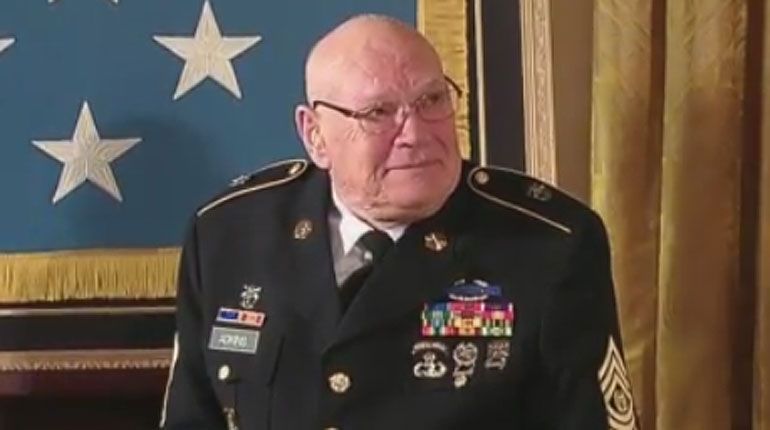 “The North Vietnamese soldiers had us surrounded on a little hilltop and everything started getting kind of quiet,” Adkins is quoted as saying in an Army report. “We could look around and all at once, all we could see were eyes going around us. It was a tiger that stalked us that night. We were all bloody and in this jungle, the tiger stalked us and the North Vietnamese soldiers were more afraid of the tiger than they were of us. So, they backed off some and we were (able to escape).”

Helicopters rescued Adkins and the rest of his group on March 12.

The Army says Adkins killed 135 to 175 enemy soldiers during the Camp A Shau battle. He suffered 18 wounds during the 86-hour ordeal.

“I’m just a keeper of the medal for those other 16 (U.S. troops) who were in the battle, especially the five who didn’t make it,” he told Army News Service.

“I can tell you every man who was there and the five who lost their lives. I can tell you how that happened. It diminishes, but it does not go away,” Adkins said.

And he remembers the South Vietnamese who stuck by his side.

“There were about 410 indigenous Civilian Irregular Defense Group soldiers there with us, and of those, only about 122 survived, and most of those were wounded. It was a horrible, horrible battle. There was valor on all sides, not only from the Americans, but from the CIDG soldiers also,” he’s quoted as saying in an Army report.

Spec. Donald P. Sloat was also awarded the Medal of Honor posthumously for his actions in using his body to shield comrades from a grenade blast near Danang, Vietnam, in January 1970.

Additionally, the White House has announced one more Medal of Honor recipient: From the Civil War, 1st Lt. Alonzo H. Cushing, who held out against Confederate troops during Pickett’s Charge on July 3, 1863, part of the Battle of Gettysburg.

Cushing manned the last serviceable Union artillery battery during the Confederate assault, which came within 100 yards of his position. He was killed by Confederate gunfire.

“His actions made it possible for the Union Army to successfully repulse the Confederate assault,” a White House statement said.

A ceremony for the presentation of Cushing’s honor has yet to be announced, the White House said.