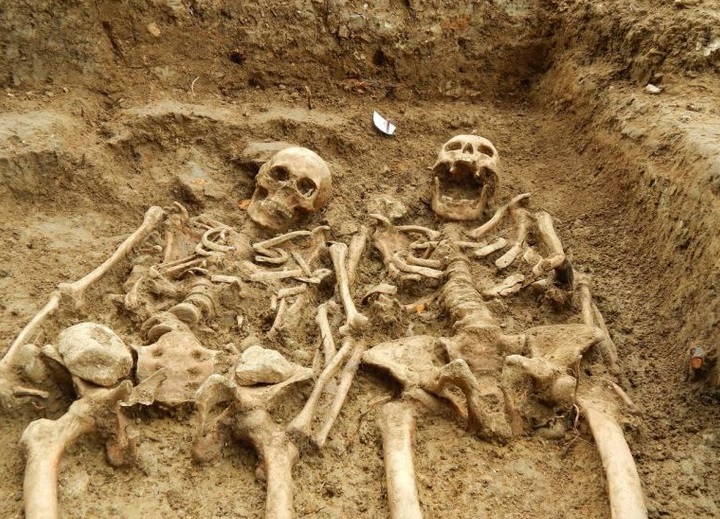 Even death couldn’t part two skeletons excavated from a lost chapel in an English county, found with their fingers entwined.

A team of archaeologists from the University of Leicester Archaeological Services (ULAS) are working with volunteers on a four-year excavation project at the site, which overlooks the small village of Hallaton.

Vicki Score, ULAS project manager, says the skeletons were placed together in this position, as there was enough room in the grave to have them buried apart.

Aside from the bonded couple, 11 skeletons have been found so far, which are yet to be analyzed, but some discoveries have been made already.

Score says one was of an older man aged 46 or over who appeared to have been struck on the head with a sharp weapon such as a pole axe. Another, she says, was in his mid-twenties, with teeth showing severe childhood trauma during the first nine years of his life.

“He was buried in a very unusual position in a pit with his legs splayed widely apart, arms flexed at the elbows and hands tucked beneath his chin.

“We have no idea why he was buried like this — it could possibly be due to a medical condition.”

Both skeletons also had lesions on their skulls which suggest they had head lice.

The team are hoping to find out more about how the gravesite was chosen.

Score says: “We have seen similar skeletons before from Leicester where a couple has been buried together in a single grave. The main question we find ourselves asking is why were they buried up there?”

It is thought the chapel may have served as a pilgrimage, or the main church possibly refused to bury the bodies because they were criminals, foreigners or diseased.

She adds that Roman archaeology beneath the chapel imply that something important already existed there, which made it a special place.

Other findings include the walls and tiled floors of the site, fragments of stone masonry, wall plaster, tiles and lead from the windows. Silver pennies dating between the 12th and 16th centuries give clues as to when the chapel was in use.

In 2000, the Hallaton Treasure was discovered, consisting of Iron Age coins, parts of Roman helmets and debris from feasting.

The county was also where the remains of 15th-century monarch Richard III were uncovered beneath a parking lot in 2012, raising questions about how the controversial ruler lived and died.