America’s oldest workers: Why we refuse to retire! 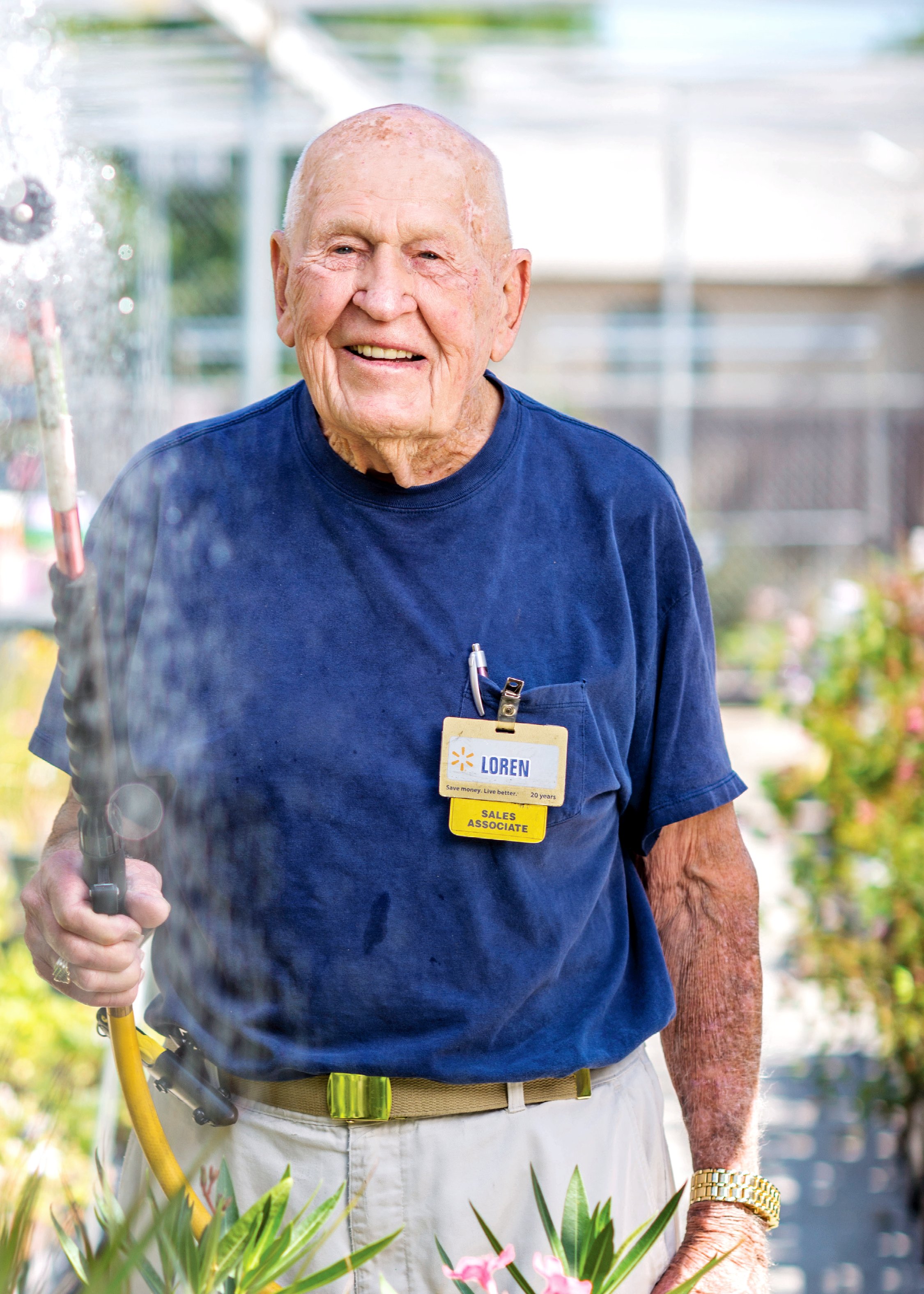 (CNN) — For these seniors, the best retirement is not to retire. From a 102-year-old Wal-Mart worker to an activist park ranger, these workers have stayed on the job well into their golden years.

At 102 years old, Loren Wade is one of the oldest workers in the country.

For the past 30 years, he has worked at Wal-Mart’s Winfield, Kansas store. Currently, he works 32 hours a week as an associate in the lawn and garden department, doing everything from stocking the shelves and running the cash register to helping customers pick out flowers for their garden.

“He’s so good with customers,” said store manager Tonya Villar. “They actually seek him out.”

A former mail carrier, Wade gave retirement a try in the early 1980s but deemed it “pretty boring.”

He and his wife of 67 years live mostly off his Social Security benefits and his small Postal Service pension, but he says the paychecks from Wal-Mart “come in handy, too.” “I can buy things that I couldn’t buy off of Social Security, like ice cream and to go out to eat once in a while,” he said.

But it’s not all work. He and his wife have visited almost every state in the U.S. and he played the saxophone and other instruments in a local band for nearly 80 years.

Wade says he plans to work as long as he can. Although he admits: “These 50 pound bags of dog food are getting pretty heavy,” he said.

Betty Reid Soskin has been an office worker, a record store owner and a political staffer. But it wasn’t until she was well into her 80s that she found her dream job.

Seven years ago, she became a park ranger at the Rosie the Riveter/World War II Home Front National Historical Park in Richmond, Calif. Three times a week, she shares with visitors what it was like to work in a segregated union hall during World War II — how she never saw herself as a “Rosie” since black women weren’t hired to do the same work as white women.

“It seems to me that all of the things I’ve done leading up to this period were in preparation for what I’m living now,” said Soskin, who is the country’s oldest full-time park ranger. “So it’s rather an enviable spot to be in. I wouldn’t think of retiring.”

Soskin says she joined the park service “almost accidentally” after helping advise on the creation of the park while working as a field representative for a local state assembly person.

A social activist for much of her life, Soskin made news last year for speaking out against the government shutdown, which left her furloughed from work.

“I still think of her as an activist, but she’s not out there on the picket lines anymore,” said park superintendent Tom Leatherman. “She’s found a way to tell those stories she thinks need to be told, but is doing it in a way which is very non-confrontational and is very personal.”

In a career that has spanned many decades, Kenneth Curzon has done everything from managing service centers at car dealerships to acting as Smokey the Bear for the U.S. Forest Service. He’s also a World War II veteran who witnessed D-Day from the beaches of Normandy as a member of the British forces.

But for the past 24 years he has been running the parking services at Scripps Memorial Hospital, which sees more than 3,000 vehicles come in and out every day.

His work day starts at 6:15 a.m. so he can ensure all of the equipment, including the parking lot gates and ticket machines, is working before he moves on to other duties, like preparing financial and operations reports.

“I’m not sure that I’ve ever beat him in in the morning,” said hospital Chief Executive Officer Gary Fybel. “He’s always here bright and early.”

The extra pay has given Curzon enough cushion that he has given some of his retirement savings away to friends, family and charities.

While he has worked longer than many of his coworkers have been alive, he said he has no plans to stop.

“If they came to me and said I need to step aside then I would do that, but I would probably look for another job,” he said.

Taking one of Professor John Fraser Hart’s geography classes at the University of Minnesota is like taking a step back in time.

The World War II veteran is known for donning a bow tie and using a carousel slide projector to show off his collection of tens of thousands of Kodachrome slides of landscapes across the country, all of which he’s taken himself.

“In some ways he feels like he is a relic of an earlier time but he doesn’t apologize for it at all,” said retired University of Minnesota professor John Adams, who worked with Hart for nearly 40 years.

While Hart’s style may not appeal to everyone, many students praise him in online reviews, noting his “wacky sense of humor” and his “all-around charming and entertaining” personality.

In more than 50 years of teaching, Hart has published 15 books and taught more than 50,000 students.

While he could have afforded to retire long ago, Hart said he simply loves his job too much.

“I’ve learned a lot and I have a chance to share with students,” he said. “Each year, I think I keep getting a little bit better at what I’m doing.”

Novalene Slatton will tell you that she owes her job to former president Bill Clinton.

She has been working at the Hope-Hempstead Chamber of Commerce ever since 1992, when Clinton had just won the Democratic nomination for president and his small hometown of Hope was flooded with visitors and phone calls. Needing extra help, the Chamber of Commerce hired Slatton as a receptionist. She’s been there ever since.

Slatton now works three days a week, manning the phones and helping the office to run smoothly. But her favorite duty is soliciting donations for Hope’s annual Watermelon Festival.

The festival “is something she is extremely well known for,” said Chamber Executive Director Mark Keith.

Slatton said the money she’s earned from her job has helped her contribute to savings accounts for her three grandchildren, who are in college or early on in their careers.

When she’s not working, Slatton goes to horse races with her brother and visits with friends, many of whom live in retirement homes.

As for her, she says she has no plans to retire.

“I just don’t want to stay at home by myself and look at four walls,” says Slatton, whose second husband passed away this year. “So many people have retired, and then they say they’re bored to death.”

Nominated to the federal bench by President Lyndon B. Johnson in 1967, Jack Weinstein estimates that he has heard roughly 25,000 legal cases in his career, touching on everything from discrimination against African-American students to gun manufacturing.

And his decisions have made him “one of the most renowned judges in the history of the federal judiciary,” according to a 2013 American Bar Association journal profile of the U.S. District Court judge.

Long known for his judicial activism, Weinstein said he’s proud of the influence he has had on the law — no matter how controversial. “Society in this country is constantly changing, so the law has to be adjusted,” he said.

He has long crusaded against mandatory minimum sentences for drug offenders, while in more recent rulings he has battled what he said were excessive prison sentences for a man who had viewed child pornography.

He still wakes each morning at 5 a.m. so he can exercise (he enjoys swimming in his pool) and make breakfast for his wife before being driven from his home in Long Island, N.Y. to the Brooklyn courthouse.

Weinstein says he has no plans to retire, citing his love for “the excitement of the law” and the opportunity to help people and “occasionally improve society, even if only very modestly.”

The father of ‘The Blob’

Jack Harris made his movie making debut with the “The Blob” when he was 39 years old — and the film is still keeping him busy decades later.

Not only is he helping to produce the latest remake of the cult horror film (which he said is slated to be released sometime next year), but he is also advising on the production of “Blob”-related slot machines.

In February, the 95-year-old producer set a Guinness World Record for being the oldest recipient of a star on the legendary Hollywood Walk of Fame. Harris is also currently writing a memoir of his decades long entertainment career.

“That’s one of Jack’s favorite sayings — getting more squeal out of the pig,” said his wife Judith Harris about her husband’s many ventures.

Harris first dreamed of working in Hollywood when he was a child dancing in vaudeville theaters throughout the East coast. After working in the business most of his life, he said he can’t imagine quitting now.

“Living and working over 90 is something that I just found happening,” he said. “I’ve never been a lazy guy… So I wake up with joy in the heart for the day, exercise every day like a solider and I believe you should make a living doing something you love passionately.”