A truck driver has been charged after a Wednesday afternoon crash on the bridge span of the Monitor Merrimac Memorial Bridge-Tunnel left part of his truck hanging from the side of the bridge.

The crash occurred around 12:30 p.m., shutting down all lanes. The crash was cleared and all lanes reopened just after 4:00 p.m.

Accdording to Virginia State Police, a 1997 International box truck was traveling northbound on I-664 in the right lane when traffic began to slow down.

The driver of the truck, 74-year-old Billy Cooper of Chesapeake, struck the rear of a 2013 Honda Accord, pushing it to the left side of the bridge against the jersey wall.

The truck ran off the road to the right and struck the jersey wall and a pole holding a sign board. The sign board ripped the top and side of the box truck, causing debris to spread across the interstate. A side panel of the truck was seen dangling over the side of the bridge.

Though VSP note that no vehicles went into the water, the U.S. Coast Guard responded along with other agencies to assist.

Several other vehicles were involved in the incident due to debris.

The driver of the Honda, 30-year-old Mary Jane Durago of Hampton, suffered minor non-life threatening injuries.  Cooper, the driver of the truck, was not injured, but the vehicle has been totaled, according to an official with Tidewater Fleet Supply, an automotive and heavy equipment parts distributor.

Cooper has been charged with following too closely. 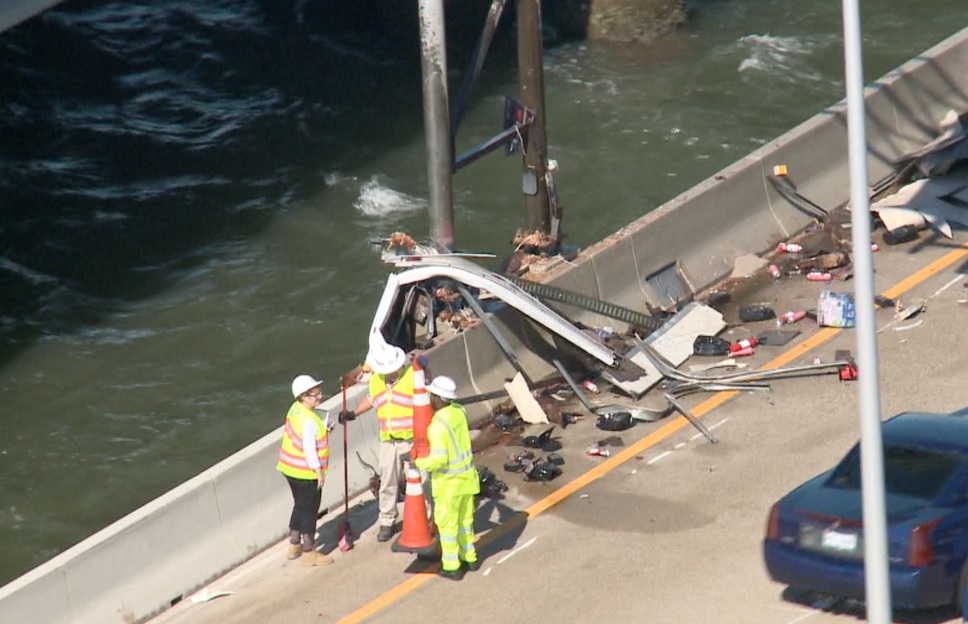