Some debris may wash up on beaches around Wallops and may contain hazardous materials. If you find any debris from the explosion do not approach it and call the Wallops Incident Response team at 757-824-1295.

Wallops Island, Va. - Orbital Science Corp.’s Antares rocket exploded into a huge fireball seconds after launch from Wallops Island Tuesday evening. What was left of the spacecraft and rocket plummeted back to Earth, causing even more flames upon impact.

Most of the damage appears contained to south end of Wallops Island, mainly in the hazard area near the launch pad that was cleared ahead of the launch.

State and local emergency responders on site during the blast quickly jumped into action to contain the fire and secure the scene.

“Virginia state and local emergency responders are playing a vital role in the wake of this evening’s failed launch on Wallops Island,” said Governor McAuliffe. “Going forward, Virginia transportation, safety and environmental quality officials are ready to assist NASA and Orbital in assessing the impact of this evening’s accident and mitigating any environmental or public safety concerns.”

The Department of Environmental Quality will assess whether there are any pollution concerns.

The Orb-3 mission was set to carry some 5,000 pounds of supplies and experiments to the International Space Station aboard the Cygnus cargo module. The Space Station crew was watching the launch feed when the explosion happened.

The rocket and spacecraft -- which together cost more than $200 million, according to Frank Culbertson, the general manager of Orbital's Advanced Programs Group -- are gone. And there's obvious damage beyond that, including to the launchpad, though the night skies made it hard to immediately gauge how much.

One thing officials do know is that rocket science is, in the words of NASA Administrator Bill Gerstenmaier, "a really tough business."

"Tonight's events really show the difficulty that it takes for us to do this task of delivering cargo to the space station," he said.

Witnesses: From 'breathtaking' to horrific

The Orbital rocket had been set to go up Monday, only to be scrubbed "because of a boat down range in the trajectory Antares would have flown had it lifted off," according to NASA. Coast Guard spokesman David Weydert said the boat that triggered the postponement was 40 miles offshore.

Tuesday, by contrast, seemed perfect. Just before liftoff, NASA reported "100% favorable" weather and "no technical concerns with the rocket or spacecraft being worked."

It seemed to be going perfectly when Ed Encina saw the launch brighten up the sky from his vantage point about 3 miles away.

"And then, all of a sudden, you see a big fireball," said Encina, a Baltimore Sun reporter.

Encina recalled a loud boom that caused "your feet (to) shake a little bit," as well as flames enveloping a roughly 100-yard area around the launchpad in a marshy area with brush.

CNN iReporter Dymetria Sellers, who watched from a drawbridge because the NASA visitors station was full, recalled a "breathtakingly beautiful" sight when the rocket ascended, followed by mass confusion as flames lit up the early nighttime sky moments later.

"About 30 seconds later, we could hear and feel two booms reach us, and it was apparent the rocket had exploded," she said.

Mark Kelly, a former NASA astronaut, said such a colossal fire was to be expected.

"It takes a lot of propellant to take a spacecraft of that size moving 25 times the speed of sound," Kelly told CNN, explaining how fast the rocket should have gone on its way to the space station. "So when it fails, it's usually pretty catastrophic."

Authorities said the safety parameters appear to have worked, and noted the lack of casualties.

"All we lost was hardware," Culbertson said. "That hardware, however, is very important."

That's exactly what officials -- both from public agencies like NASA and private companies like Orbital -- hope to find out. Crews said Thursday that they believe it will take days and not weeks to find the cause.

Video of the shockwave from the explosion:

"What we know so far is pretty much what everybody saw on the video," Culbertson said. "The ascent stopped, there was some, let's say disassembly, of the first stage, and then it fell to Earth. ... We don't really have any early indications of exactly what might have failed, and we need some time to look at that."

Orbital will lead the investigation, along with the Federal Aviation Administration, with NASA assisting.

Among other things, they'll try to collect and examine any debris that can be recovered, review data from the spacecraft before its destruction and look at videos around the launch time.

The main focus Tuesday night was safety. Bill Wrobel, the Wallops Flight Facility director, said fire crews had set up a perimeter around the affected area. "We're just basically letting the fire burn out, but they are contained," he added.

Authorities expressed confidence that no people were directly affected by the explosion, but they could come across scattered remnants that are possibly floating in the water.

As to when Orbital will fly again from Wallops, the only site it's now permitted to launch from, Culbertson didn't specify a timetable beyond saying, "We will fly again as soon as we can safely."

Gerstenmaier offered a similar take: "We'll figure out what the failure is, we'll fix it, and we'll learn from it."

In the meantime, they'll have to rebound from the loss.

A third of the spacecraft's cargo was material for scientific investigations such as a Houston school's experiment on pea growth and a study on blood flow in space.

There also were basic supplies meant for the crew of the space station -- now orbiting more than 200 miles above Earth -- including more than 1,300 pounds of food.

But in the short term, no one is saying the space station's six-person crew will go hungry.

NASA won't directly restock them, having relied on private companies to do so since the end of its space shuttle program. That includes Virginia-based Orbital, which had its first of eight planned ISS launches in January out of the Wallops facility as part of its $1.9 billion contract with NASA.

If Orbital can't resupply the space station, others can. On Wednesday, for instance, a Russian Soyuz resupply spacecraft stocked with cargo and crew supplies is set to launch from Kazakhstan. SpaceX, another private company, plans its fifth mission in December, including more supplies and a laser instrument to measure pollution, dust and other aspects of the atmosphere, according to NASA.

Even if those missions somehow fail, the space station crew has enough on hand to last well into next year.

Today, NewsChannel 3 spoke with Barron Beneski, the Vice President of Corporate Communications for Orbital Sciences. We asked him how it happened and if they knew what caused Tuesday's explosion.

"We're in the process of determining what the cause is of yesterday's Antares launch failure.  That process starts immediately after the failure was witnessed. Data is gathered up.  Safety protocols were followed. People did their jobs. So in an odd sense, everybody did their jobs and the safety system worked as planned," says Beneski.

We also asked him about the engines after many have been asking about the issue.

"We can't get fixated on what we might think be the cause. You really have to do a thorough 100% job at investigating everything. So while there is some speculation out there, it's speculation at this point, and we'll have to leave it at that. I will say that in a matter of days and up to a week, with the amount of data that we have with the video and photography assets that were captured by the range, we should be able to be zeroing in on at least a couple of the most likely suspects probably within about a week or so.

#antares #wallopsisland on fire after launch failure. Police came and was ushering everyone away at this point. Very unfortunate but thankful at this point they are reporting no one was killed. #thankgod 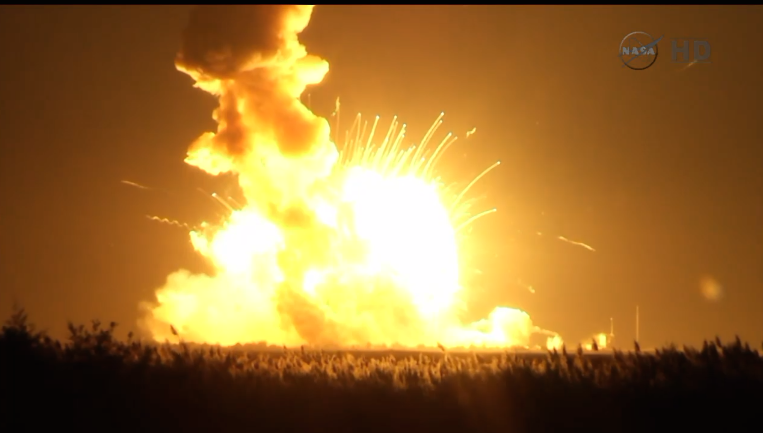 The rocket was carrying various things, including spacewalk tools for the space station, flight equipment, food, books and computer resources for the crew.

Some of the research highlights for the mission included:

Orbital had named the Cygnus spacecraft the SS Deke Slayton for the late Donald “Deke” K. Slayton, a decorated U.S. Air Force pilot and NASA astronaut who was a champion of America’s commercial space program.

The two-stage Antares rocket uses a liquid-fueled first stage powered by two Aerojet Rocketdyne AJ26 engines and a solid motor ATK CASTOR 30XL upper stage to boost Cygnus into orbit. The powered launch sequence was scheduled to last about nine-and-a-half minutes from liftoff through the separation of Cygnus from the rocket. The mission was the first to use the larger, more powerful CASTOR 30XL second stage motor.

Orbital Sciences Corporation confirms that today’s Antares rocket launch from NASA’s Wallops Flight Facility was not successful. Shortly after lift-off from the Mid-Atlantic Regional Spaceport Pad 0A at 6:22 p.m. (EDT), the vehicle suffered a catastrophic failure. According to NASA’s emergency operations officials, there were no casualties and property damage was limited to the south end of Wallops Island. Orbital has formed an anomaly investigation board, which will work in close coordination with all appropriate government agencies, to determine the cause of today’s mishap.

“It is far too early to know the details of what happened,” said Mr. Frank Culbertson, Orbital’s Executive Vice President and General Manager of its Advanced Programs Group.“As we begin to gather information, our primary concern lies with the ongoing safety and security of those involved in our response and recovery operations. We will conduct a thorough investigation immediately to determine the cause of this failure and what steps can be taken to avoid a repeat of this incident. As soon as we understand the cause we will begin the necessary work to return to flight to support our customers and the nation’s space program.”

Orbital will provide more information as it becomes available and is verified.