UPDATE: A spokesperson for the Virginia Beach Commonwealth’s Attorney confirms that charges were dismissed on January 12th against two Navy Sailors and a Virginia Beach Police officer who were involved in a bar fight last October.

The two Sailors went to the magistrate as citizens and filed charges against Virginia Beach Police officer Alejandro Torres, 31, who was charged with two counts of Assault and Battery and one count of Disorderly Conduct.

According to the Commonwealth’s Attorney’s office, each of the defendants had planned to exercise their fifth amendment rights. Without their testimony, it would have been difficult to prove the case beyond a reasonable doubt, thus resulting in all of the charges being dismissed.

Virginia Beach, Va. - Virginia Beach Police are investigating a fight between off-duty officers and Navy personnel at a bar on October 25th.

Two Navy sailors were arrested in connection to the incident. The fight also involved two off-duty Virginia Beach Police officers. One of the officers has been charged and placed on administrative duty.

Police say it happened just past midnight early Saturday morning at The Eagles Nest bar on Nevan Road, near the Hilltop Shopping Center.

The bar's owner says the fight broke out in the parking lot and the security team hired by the bar dealt with the issue before police showed up.

On Tuesday a witness who wanted to be anonymous contacted NewsChannel 3 saying he feels the whole thing got out of hand.

"I just really want to straighten out that the officers weren't at fault in the situation," he said.

He says it all got out of control when a party bus full of sailors pulled up to the bar. He says that when he saw three off-duty officers walk out of the bar and begin talking to one of the women who got off the bus. A guy who was on the bus then stepped in and that's when he says the guy swung a punch at one of the off-duty officers and missed, but then another off-duty officer swung back and hit him. The sailor fell to the ground.

"The off duty officer exchanged a punch back in defense," he added. "I just wanted to get out of the way."

He says it got so crazy, the security guard at the bar pepper-sprayed the entire crowd.

"I think once the second punch was thrown and the guy went to the ground, the bus was getting unruly and this individual felt it was necessary seeing how it was 20 on two," the witness told NewsChannel 3.

Police did not elaborate on any of the details of the fight, just that they are still investigating.

CWO2 Michael Paul Hayden, 42, was arrested and charged with Simple Assault and Disturbing the Peace.

Both are assigned to VFA-131 at Naval Air Station Oceana. The Navy has no information on disciplinary action at this point.

Both men have been released from jail on bond. 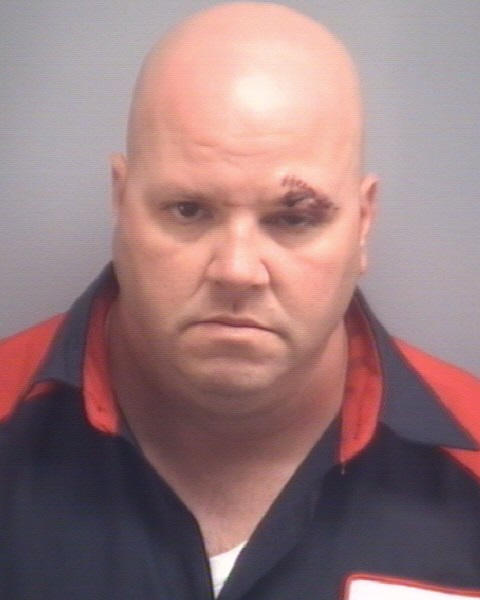 Officer Alejandro Torres, 31, was charged with two counts of assault and battery and one count of disorderly conduct. Torres has been placed on administrative duty pending a court appearance and an internal investigation.

Though police have released the two mug shots for the sailor involved, NewsChannel 3 has learned a mug shot for Officer Torres doesn't exist. Virginia Beach spokeswoman, Tonya Borman says that's because a magistrate released Torress on a summons. She explained why in an email:

Police say if you were at Eagles Nest that Friday night and saw what happened and want police to know, you can give an official statement to the Executive Aide to the Chief of Police at 385-4514.