Norfolk - More than 4,000 Sailors and Marines serving in the Bataan Amphibious Ready Group (ARG) came home to their homeports of Norfolk and Virginia Beach today after a nine-month deployment.

"I'm extremely proud of the Bataan Amphibious Ready Group Sailors and Marines. As I approach 29 years of service, I have never seen a more efficient, dedicated, or combat ready team. Operating forward, they repeatedly executed missions with precision and unmatched zeal to win," said Capt. Neil Karnes, commodore, Amphibious Squadron (PHIBRON) Six. "Whether rescuing more than 280 migrants from certain death at sea or inserting forces ashore to support humanitarian efforts, the Bataan ARG/MEU team accomplished every mission assigned with resounding success. After this deployment, I am no longer concerned with who will lead tomorrow's Navy and Marine Corps. I witnessed first-hand the commitment and professionalism of America's best, our young men and women of the Naval Service, they get it; we are in good hands." 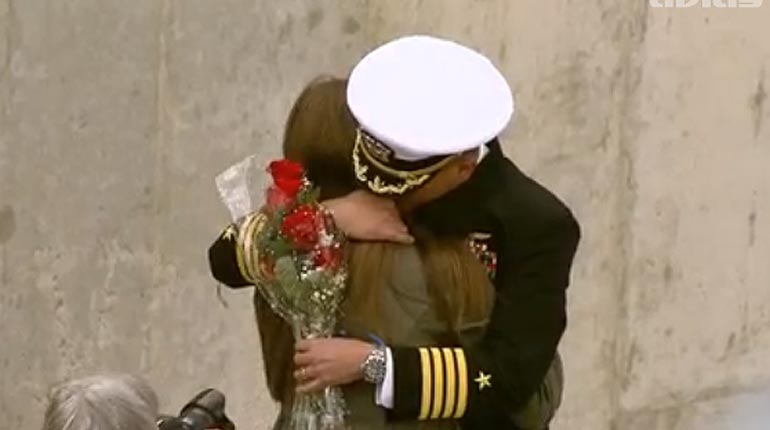 The ARG participated in several multinational exercises designed to strengthen coalition partnerships and reinforce regional security and stability, including Spanish Amphibious Exercise (PHIBLEX) 14 and Eager Lion 2014 exercise, as well as bi-lateral training with the Greek and French. The 22 MEU supported an assessment of humanitarian options in support of displaced Iraqi civilians trapped on Sinjar Mountain by the Islamic State of Iraq and the Levant, and conducted surveillance and reconnaissance missions and fixed-wing strike missions in Iraq in August and September with aircraft based aboard Bataan.

The Bataan was also involved in two rescues at sea. On March 8, Bataan rescued two Turkish mariners from their sinking cargo ship in the Aegean Sea. On June 6, the ARG participated in the rescue 282 migrants in the Mediterranean Sea after their small vessel sank.

"I think it's important that the younger Sailors who are experience a long and arduous deployment for the first time understand that the Navy recognizes their hard work, and is prepared to offer monetary reward for it," said Intelligence Specialist 1st Class Charles Kirby, from Wilson, N.C.

The Bataan and Mesa Verde are homeported at Naval Station Norfolk and the Gunston Hall is homeported at Joint Expeditionary Base Little Creek-Fort Story.