The ships were serving as part of Carrier Strike Group (CSG) 2, and returned after a nine-month deployment in the 5th and 6th U.S. Fleet areas of responsibility that saw the carrier launch airstrikes against ISIS forces in Iraq and Syria. CSG-2 traveled a total of 73,400 nautical miles on the deployment.

"I am extremely proud of each and every Sailor in the George H.W. Bush Strike Group and our many accomplishments during this 9-month deployment. The flexibility and striking power inherent in a Carrier Strike Group made a difference on this deployment, and professional Sailors made it all happen." said Rear Adm. DeWolfe H. Miller III, commander, GHWB CSG. "I am also eternally grateful for the wonderful support we all received from family members and friends, many of whom welcomed us home today."

Highlighting the versatility of a CSG, in one 30-hour period, CVW-8 flew combat sorties in support of the Afghan Democratic run-off elections. The Bush then quickly steamed west through the Straits of Hormuz transit and launched armed sorties into Iraq to counter ISIL extremist advances. The group's ships and aircraft were the first U.S. forces on scene providing combat capability over Iraq, and launched the first airstrikes in Iraq on August 8th.

"This ship and air wing team possesses tremendous capabilities which can, and did, have an immediate impact on events in the U.S. 5th and 6th Fleet areas of operations. This impact is generated not only by the incredible striking power of a Carrier Strike Group, but by the committed men and women aboard these ships that make it happen day in and day out in extremely trying conditions," said Capt. Andrew Loiselle, commanding officer of George H.W. Bush. "From day one, our Sailors came together and remained focused on the mission. I'm extremely proud of our Sailors and all they've accomplished." 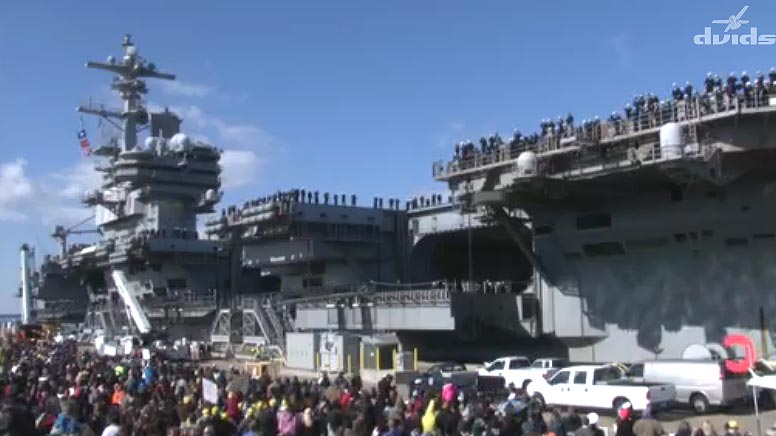 In the early morning of Sept. 23, GHWB CSG and coalition partners participated in the first offensive strikes deep into Syria, engaging both ISIS and Khorasan Group targets using a mix of strike fighter and bomber aircraft as well as Tomahawk Land Attack Missiles (TLAMs). The 47 TLAMs employed in the strikes were launched from the USS Arleigh Burke and USS Philippine Sea operating in international waters from the Red Sea and North Arabian Gulf, respectively.

This was the second combat deployment for the Bush.