Virginia Beach, Va. - It only took fifteen minutes for a robber to hit two 7-Eleven stores near Town Center on Wednesday night, according to Virginia Beach Police dispatch.

Both stores are less than five minutes away from each other.

The first robbery happened on Virginia Beach Boulevard, according to dispatchers. At around 11:15pm, the man went inside, carrying a knife, and demanded money.  Dispatch says he got away with cash from the register.

By 11:30pm, he had made his way down the Boulevard to another 7-Eleven, just five minutes away on Aragona Boulevard. Virginia Beach Police dispatchers say he was carrying a knife, and demanded money again.

In both robberies the suspect appears to be a white or light skin black male appearing to be in his early 20’s, 5’9-5’10, 160 lbs., skinny build, wearing a black beanie cap, wig consisting of dreadlocks covering his face, dark colored striped jacket, blue jeans, and armed with a steak knife.

If you have any information or can identify the suspect, call the Crime Line at 1-888-LOCK-U-UP. 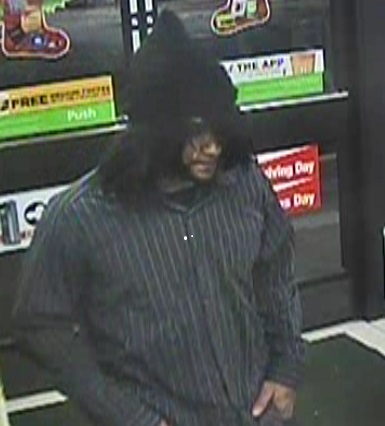