Police stressed that the black teen — identified by his family as Antonio Martin, 18 — pointed a gun at the white officer in a gas station parking lot in the St. Louis suburb of Berkeley before the officer fired, and that surveillance video, while taken from a distance, backs up the account.

But the shooting led to a tense couple of hours at the station, where scuffles with police broke out — and lit fireworks were thrown — as scores of people gathered. The shooting occured in a metro area already simmering with emotion over August’s shooting of unarmed black teenager Michael Brown by a white police officer in Ferguson.

The scene was calm later Wednesday morning, and officials asked for peace to prevail — and for people to take a close look at what led to the shooting.

“I understand the emotions … but I think we need to understand the context of what happens … with these types of sitations,” Belmar, whose department is investigating the shooting, told reporters.

Belmar said the officer — a 34-year-old, six-year Berkeley police veteran — was responding to a report of a theft when he pulled into the parking lot of a Mobil gas station at about 11:15 p.m.

He left his cruiser and talked to two men in the lot. Eventually, as the officer stood by the driver’s side tire of his cruiser, one of the men backed away from the cruiser’s passenger side headlight, then stepped forward again pointing a gun at the officer, Belmar said.

The officer, whom police did not name, lost balance and fell as he moved back in reaction, but managed to fire what investigators believe were three shots, hitting the gunman at least once, Belmar said.

The slain gunman is not believed to have fired the gun, which was loaded, Belmar said. 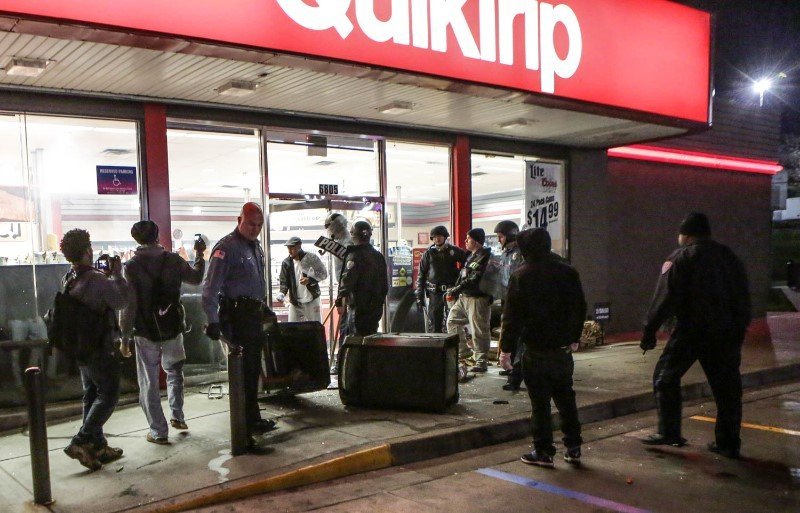 Police released gas station surveillance video of the incident. Recorded from a distance, the video shows three small figures in the upper-left portion of the screen. A figure can be seen backing away from the squad car, and then walking back with an arm raised at the officer.

Because of the distance, details are difficult to make out.

The released clip ends before the shooting. Belmar said he didn’t know whether the two men that the officer approached had anything to do with the theft report.

Police didn’t name the teen who died, but his family told CNN that he was Antonio Martin.

Martin’s father, Jerome Green, said his son had indicated he was going out to meet his girlfriend and had not mentioned any other person who might be with them.

“He was supposed to come home,” Green said. “We’re getting ready for holiday; everyone wanted to see him. My grandmother hadn’t seen him for a while.”

Protesters gathered around an ethnically diverse group of dozens of police officers, who stood between them and the scene. People in the crowd screamed at police. Others spoke more calmly.

What looked like a firework exploded near a gas pump, scattering people and temorarily filling the area with thick, white smoke, video from CNN affiliate KMOV showed.

Four people were arrested on suspicion of assaulting officers, Belmar said. One police officer was sent to an emergency room after injuring himself while trying to get away from the firecracker, Belmar said.

Another officer was treated at a hospital after being hit in the head with a rock or a brick, Belmar said.

St. Louis Post-Dispatch photographer David Carson told CNN’s Hala Gorani that some of the protesters damaged police cars. CNN showed images of one squad car with a large dent in its side.

KMOV video showed a white plume rising at another location down the street. Belmar said someone had tried to set a fire at a nearby store, but someone extinguished it.

Among the protesters were ministers and people who had participated in Ferguson demonstrations after Brown’s shooting death, the Post-Dispatch reported.

Before sunup, protesters thinned out, and those remaining stood calmly behind police tape.

Missouri state Sen. Maria Chappelle-Nadal, who has criticized authorities over the Brown shooting, appealed for calm Wednesday morning — saying that if indeed Martin was armed, she felt Tuesday’s shooting could be different.

“While tensions are high, we need to be respectful of what the facts are, and then our actions need to follow those facts,” Chappelle-Nadal told CNN’s “New Day.”

“While we’re waiting for the facts, we need to have some calm so we know that’s going on. Not every case is the same,” she said.

Martin’s mother, Toni Martin, also told KMOV that her son had gone to see his girlfriend, who lived near the station, and was with her at the time of the shooting. She said the girlfriend notified her of her son’s shooting.

Martin said her son turned 18 in September. He had been expelled from school but was trying to get his life back together, she said, and she was encouraging him to join Job Corps.

Video posted to Vimeo showed Toni Martin crying in the arms of other people.

His father, Green, said that Martin lived with his parents, together with a brother and a sister.