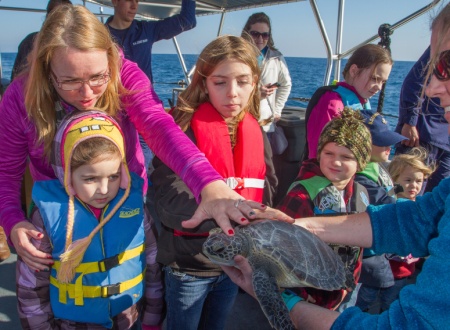 A North Carolina Aquarium employee, NCWRC employee and family of the Coast Guard crew joined the voyage where species of turtle including Kemp’s ridley, green and one loggerhead sea turtle were released near the Gulf Stream approximately 40 miles south of Beaufort.

NCWRC confirmed the location as an ideal place to release the turtles.

In late November, 50 sea turtles were transported from Massachusetts to North Carolina for treatment from hypothermia. They were some of the approximate 700 live hypothermic sea turtles found near Cape Cod in Massachusetts since mid-November. The sea turtle facilities in North Carolina were able to help with their rehabilitation.
Many of the Cape Cod turtles need more time in rehabilitation. Some of the 19 released were those found near Cape Cod. Additional turtles that were found injured or sick in North Carolina were released on the trip as well.