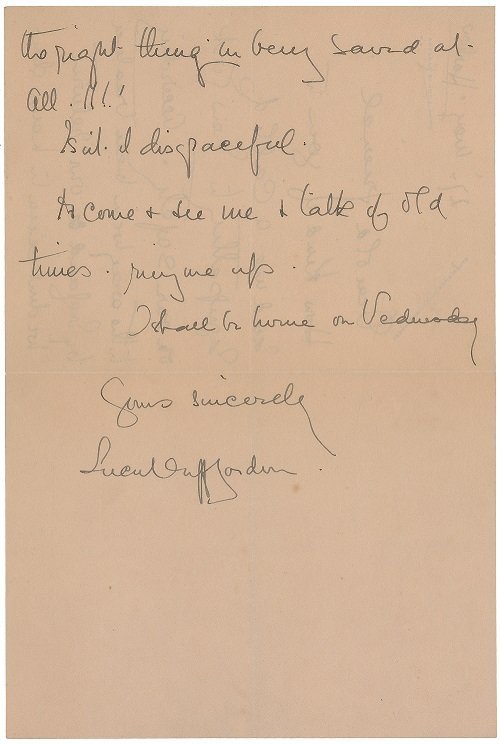 (CNN) — In the months after the ship sinking, Titanic survivor Lady Lucy Duff-Gordon’s correspondence to her friend in New York starts, as one might expect, with an appropriate amount of thanks for her concern.

“How kind of you to send me a cable of sympathy from New York on our safety,” Duff-Gordon writes in a letter that will go up for auction Wednesday in Boston.

The remarks she writes next on her own personal letterhead dated May 27, 1912, indicate that not all were pleased with how things turned out.

“According to the way we’ve been treated by England on our return we didn’t seem to have done the right thing in being saved at all!!!! Isn’t it disgraceful?” Duff-Gordon said.

Duff-Gordon and her husband, Cosmo, escaped the Titanic’s tragic end by boarding Lifeboat 1, which transported 12 passengers despite having capacity for 40.

The prominent fashion designer and her husband were the only two passengers asked to testify during the British Wreck Commissioner’s inquiry into the famous ship’s sinking. Their testimony made them popular fodder for tabloids after allegations that Cosmo had bribed the crew to row away faster, rather than trying to rescue others.

Rumors that the Duff-Gordons tried to deter the crew from making other rescues were never corroborated, but Lucy Duff-Gordon later said her husband was “brokenhearted over the negative coverage for the rest of his life,” according to a release from RR Auction, the house responsible for the sale of the letter.

Other artifacts also up for auction with Duff-Gordon’s letter include a teacup from the Titanic that was, according to the auction house, “destined for the bottom of the Atlantic,” a guitar belonging to Johnny Ramone of the Ramones, and a three-page letter by Civil Rights activist Malcolm X written from a Norfolk prison in 1950.

In his letter, Malcolm X proclaims his allegiance to “the Almighty God, Allah,” whom he credits with “cleaning our polluted souls.”

Before converting to Islam in 1948, Malcolm X lived in Boston, where he befriended musicians at the Roseland State Ballroom where he worked. Though he renounced his former life, saying, “Without Allah, no wonder we have so longingly turned so often to music for its comforting effects,” he wrote longingly of his former friends.

A letter by Grateful Dead front man Jerry Garcia sent to a a former Vogue cover model whom he met at a New York party in 1980 will also go up for sale.

Garcia asks the woman for mercy, indicating how rare such a letter is, saying, “Pardon my handwriting, this is the first letter I’ve written in years.”

He includes a sketch of the band’s first outdoor performance, saying, “Grateful Dead just played our first outdoor show of the year at a place called the Greek Theatre.”

The historic Berkeley music venue would become a home base for the band, which would have celebrated its 50th anniversary this summer.