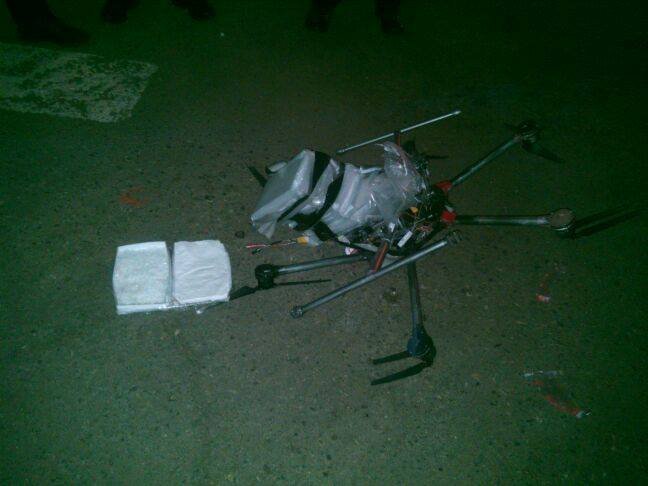 Now the smugglers are trying to do business by air, too, in unmanned aerial vehicles.

U.S. authorities acknowledge a new smuggling strategy may be emerging on the border.

“To date, U.S. Customs and Border Protection has not intercepted any drones smuggling narcotics across the borders into the United States,” said Alberto Vallina, supervisory Border Patrol agent in San Diego. “In collaboration with our federal, state, local and international law enforcement partners, CBP remains vigilant against emerging trends and ever-changing tactics employed by transnational criminal organizations behind illegal attempts to smuggle narcotics into the U.S.”

The drone was loaded with more than 6 pounds of the synthetic drug crystal meth, Tijuana police said.

The drone crashed Tuesday night in a supermarket parking lot in Tijuana.

The silver and black, six-propeller Spreading Wings S900 model was not able to withstand the weight of the load and crashed, police said.

“In San Diego, the street value, at last account, for a 6-pound load would be about $48,000,” DEA Special Agent Matt Barden said. “Once you get it across the border, that stuff’s like gold.”

This wasn’t the first time a drone was used in a smuggling attempt from Mexico, according to drug war analysts, U.S. officials and local Mexican police.

But the incident amplified concerns about border security and officers’ safety.

“I would hate to belittle 6 pounds of meth,” Barden said. “That’s like saying 6 pounds of heroin isn’t bad … but I think the big thing to look at is the fact that the cartels or drug traffickers from Mexico are using drones in their playbook.

“My greater fear, being an agent, is what a drone means to officer safety. That to me, personally, being a tactical officer, that’s my concern,” he added.

Drones are emerging as the latest technological gadget used by cartels and smugglers in trying to outfox border authorities.

The crashed drone was a prototype that used a global positioning system, or GPS, to send it to a particular destination, Tijuana police said on the department’s Facebook page.

“The cartels have been using drones for surveillance. Transporting drugs is a bit more complicated,” said Sylvia Longmire, a leading drug war analyst. “This is further evidence that the cartels have unlimited funds and creativity.”

As to why smugglers would attempt to transfer what in the grand scheme is “not that much,” both Longmire and Barden were in agreement.

“My guess … it might be a personal load,” Longmire said.

“When you look at cartels, their goal is to flood the U.S. with as much drugs as they possibly can,” Barden said. “It also could have been a test run for something bigger.”