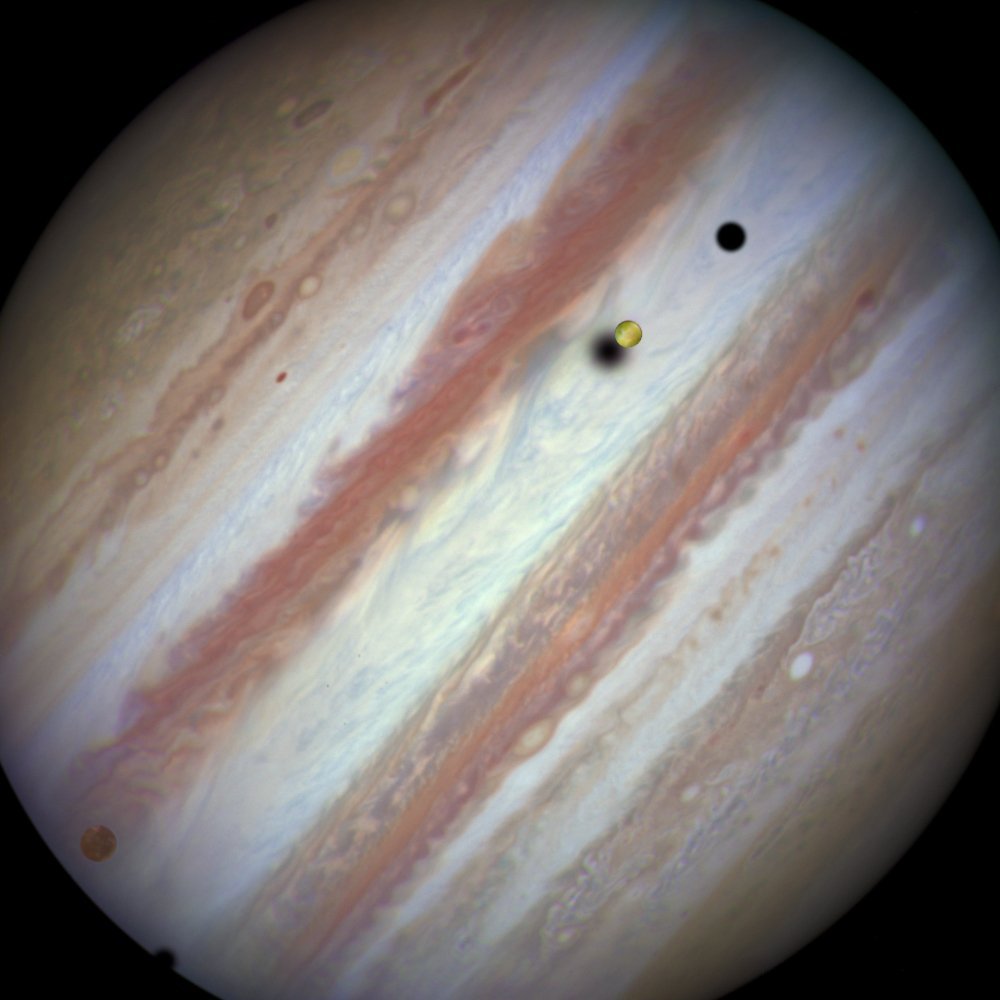 But weeks ago, it pulled its focus way in close — to just light minutes away — to view a rare and beautiful spectacle at the planet Jupiter.

Three big moons crossed past it at the same time, casting their shadows onto Jupiter’s swirling surface.

From the perspective of people theoretically standing down on Jupiter, it would be like three solar eclipses happening at once, astronomers said.

In the last 15 years, this has happened only twice, the Space Telescope Science Institute said. “The next one will be 2032,” said astronomer Carol Christian.

So, Hubble shot photos rapid fire to capture the rare conjunction in late January. And STScI published them on Thursday, along with a short fast-motion video animation.

There was no great scientific gain in Hubble taking the snaps. The moons and their crossings have been examined plenty and are well known.

“We felt that there are images which have aesthetic value above and beyond their scientific value,” said astronomer Zolt Levy.

It was a gift of beauty to the public.

It’s the largest body after the sun. And like the sun, it comprises a lot of helium and hydrogen gas, but it doesn’t have enough mass to burst into the intense nuclear fusion that makes the sun a fireball, NASA says.

It has many satellites, including 62 moons, and they swarm around the planet with many of them crossing the surface facing Earth constantly.

But only four of them are highly visible standouts. They are Io, Europa, Ganymede and Callisto.

The four moons are called the Galilean satellites, because Renaissance astronomer Galileo Galilei discovered them in 1610, when he pointed his telescope skyward, forever changing human perception of our place in the cosmos.

Many of today’s hobby telescopes are much stronger than his, so anyone can easily follow in his footsteps and cast the same gaze.

And many did, when the three moons passed, posting their recordings of the triple moon transit on YouTube.

The moons spin around Jupiter at different speeds; their orbits vary in duration from two to 17 days, so having them line up together to zip across the side of Jupiter pointed our way is special.

Io, Europa, and Callisto put on the show without Ganymede, which was too far off to the side to make it into the group photo.

Europa is in the spotlight of space explorers, because they think there may be life in the fluid water underneath its surface of solid ice.

If it is found there, this would be the first discovery of life in our solar system aside from that on Earth.