Portsmouth, Va. - After this week's snowfall and frigid temperatures, two children fell through thin ice while out playing on retention ponds. The ponds look like fun places to play... but just because they look frozen solid, doesn't mean they are.

Just how easy is it to fall through thin ice? We sent reporter Mike Mather out to Portsmouth to find out.

Luckily, Mike was outfitted with safety gear and accompanied by a few professional divers from Crofton Diving, who made sure he didn't end up in too much trouble. That company is the one local governments call when they need diving expertise. Crofton provided two divers and two safety officers to assist.

The ice at the retention pond we selected was surprisingly solid. We wondered at first if there was any ice in the area that thick enough to support an adult’s weight, because two children had broken through other ice this week. Wearing a dry suit and a safety harness hooked to a rope, I ventured onto the ice. On shore, the divers manned the rope. The ice was surprisingly solid near the shore. Closer to the middle, the ice looked the same as the ice near shore, but it cracked with each step. Still it supported my weight. However, walking over the cracks made still more cracks. At one point, my foot went through. Water that gurgled to the top of the ice added weight, and it looked like the entire surface was bowing. A little jump near that first breach, and the ice gave way.

The retention pond, it turned out, was only a few feet deep. It was easy to climb out. Walking away from that first breach, the ice cracked even worse on the pond’s north side. Without warning, it gave way and I tumbled in a second time. I have no doubt that a group of kids playing on the ice would’ve easily broken through.

News stories show that in past month, at least 12 children have fallen through ice across the country, including four in Baltimore. Five of them, including one of the boys in Baltimore, died. Near Danville this week, a woman fell through the pond on her property and died.

The most challenging part of this was trying to guess where the ice was thinnest, where it would break. Areas I thought looked weak were actually solid. And the areas that I thought might be solid cracked with each step. In this small pond, there was no way to predict where the ice was safe and where it wasn’t.

Getting @mikemather ready for his dive. How's he feeling?! @WTKR3 pic.twitter.com/Q67E17yZMv

Even the professional divers think @mikemather is crazy! @WTKR3 pic.twitter.com/ld51qq3z5H 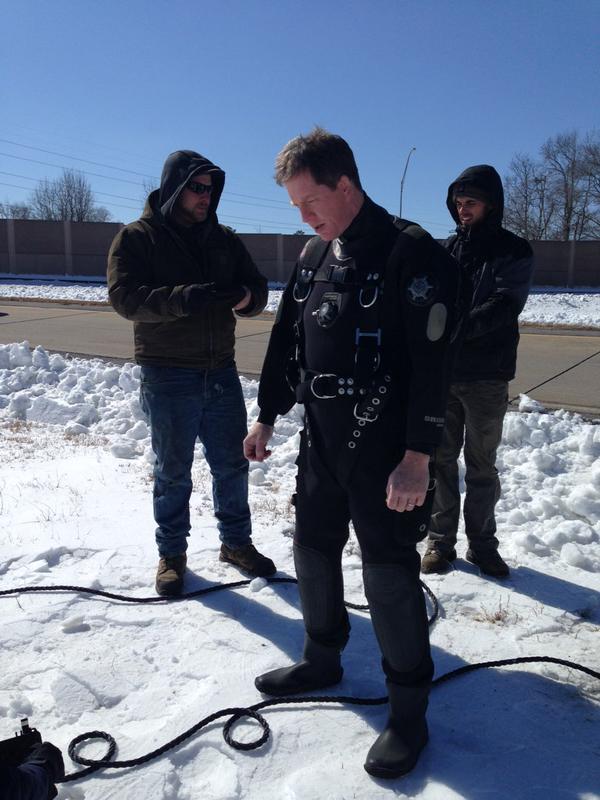