Melfa, Virginia - A VDOT worker was hurt after a tractor trailer overturned onto the VDOT truck he was driving on the Eastern Shore.

Bobby Isdell  had just stopped at a three vehicle accident  on Route 13 northbound, south of Tammy's and Johnny's, shortly before 5:00 a.m. when the tractor trailer ran off the road and overturned onto his VDOT truck.

"You have your hands on there and I guess that's the thing you grip. You hear the crunching, you see it happening and you're like okay, stop, stop, stop!"

Isdell saw the tractor trailer coming and was able to throw himself onto the passenger seat.

"I didn't hear him coming. I just saw the big, white truck coming at me and the trailer," he says.  "I leaned over as far as I could and I was kind of down like this and I had a seat belt on so I can't move so much."

He says he unfastened his seat belt and called 911 from inside the mangled cab before slowly squeezing his way out.

"It was kind of like one of those wooden puzzles, you know, you turn that way and finally I was able to get over the console and kick the door open," he says.

Isdell, who has worked for VDOT for more than 30 years, has minor cuts to his hand from holding onto the steering wheel and he was taken to the hospital complaining of back pain.

He has since been treated and released.

"Five vehicles sitting there in wrecks and everybody walked away. Everybody's okay. That's the good thing," he says. "I have a strong faith in God and this just reinforces it."

VDOT says Route 13 and other roads in the area are iced and very slick and they have responded to multiple accidents. 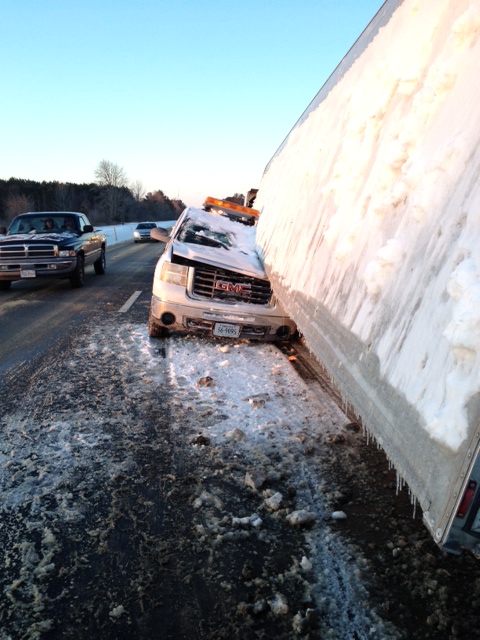 NewsChannel 3 rides along with VDOT to clear snow covered roads