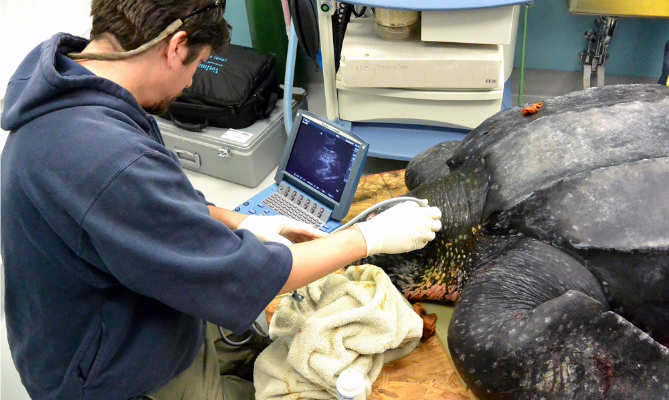 (CNN) — Marine biologists at the South Carolina Aquarium are treating a rare, 475-pound leatherback sea turtle that washed up Saturday on a nearby beach.

The episode marks the first rescue of a leatherback sea turtle in South Carolina and is believed to be only the fifth live rescue of this species in the United States, according to the South Carolina Department of Natural Resources.

The endangered turtle was found stranded on the Yawkey-South Island Preserve, a wildlife refuge near Georgetown, South Carolina. Rescuers named it Yawkey.

Because the turtle is believed to be a juvenile — rescuers say it’s probably less than 10 years old — and has not reached sexual maturity, biologists can’t yet determine its sex.

Rescuers found no external signs of trauma to the reptile, although it was hypoglycemic. Staffers with the aquarium’s sea turtle rescue program gave it antibiotics, vitamins and some time to recover at their facilities.

The treatments appear to be helping. Aquarium officials said the turtle was more energetic Tuesday than when it was first admitted.

Even so, leatherback turtles historically don’t do well in captivity. For that reason, aquarium staffers are working with the state’s Department of Natural Resources to determine the best place and time to release the turtle back into the ocean — most likely within the next few days.

Leatherbacks are the largest turtles on Earth and can grow up to 2,000 pounds. They are found throughout the world’s oceans and have been spotted as far north as Norway and as far south as South America.