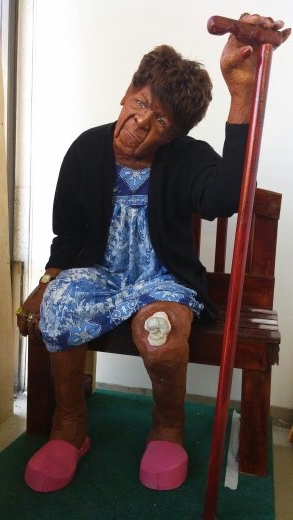 Norfolk, Va – An amazing art exhibit that brings awareness to health and environmental issues is coming to Norfolk State in April.

Professional artist and sculptor Larry P. Johnson will be holding an art exhibit at Norfolk State University called An Exhortation of Past and Present Art Styles .

This exhibit will be showcasing various 3- dimensional sculptures. Johnson has dubbed the “highlights of the show” a sculpture of Harriet Tubman and a realistic paper-mache replica of the artist’s mother, who is currently dealing with Osteoarthritis.

Johnson is a Norfolk resident who over the years has worked for many companies and organization such as The American Foil Corporation, The Chrysler Museum of Fine Art and BrickStone Studios.

Born and raised in Chesapeake, Johnson was inspired by knitting of quilts his mother made as a child. Seeing the interest he took to art, Johnson’s mother bought him various art tools, sketch pads and a paint-by-number sets.

Motivated by his mother’s Osteoarthritis, Johnson refers to himself as a servant and voice for the public, believing that, “artists should create works that bring awareness to the public instead self-purpose.”

Johnson also has various sculptures of animals such as a sea turtle, rhino, elephant and a polar bear because those are the animals that are endangered and quickly going extinct.

Johnson’s goal is to one day move to Atlanta and use art to connect with the youth.

When giving advice to someone who is interested about getting into art and making 3-dimensional pieces, Johnson says he tells others to not allow themselves to be limited by any particular style, to be open to all forms of art and to remember that hard work and dedication brings perfection.

“Painting is great at bringing an image to life, you become a small god breathing life into your art,” he says. “The legacy I want to leave behind is to be remembered as someone who was concerned about humanity and how I used my talents to promote awareness that relates  health and environmental issues.”

Johnson says that, “artist are suppose to create works that are tantalizing to the audiences senses.”

Larry P. Johnson’s, “An Exhortation Of Past And Present Art Styles”  exhibit will be held Saturday, April 4th from 5:30 p.m. -9:00 p.m. at Norfolk State’s Wise Gallery.