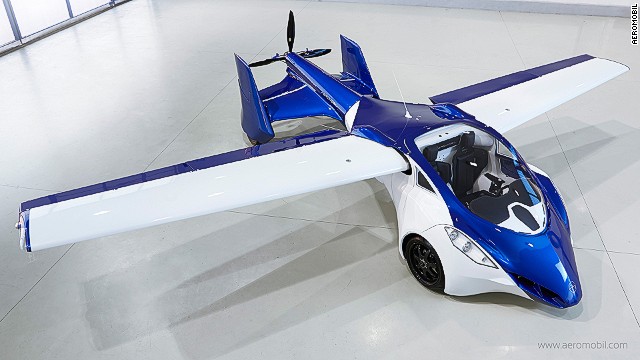 Vienna, Aus.-The technology to create the first affordable and pilot-able flying car is within our grasp.

According to Aeromobil, the car can fit into any standard parking space, use regular gasoline, and can be used on the road just like any other vehicle. Then, as a plane, it is able to use any airport in the world, but it can also take off and land using any grass strip or paved surface that is a few hundred meters long.

The Aeromobil 3.0 is mainly built from advanced composite material  including its body shell, wings, and wheels. Additionally, it has avionics equipment, autopilot, and an advanced parachute deployment system.

The 3.0 technology has a lot of advanced technology such as a variable angle of attack of the wings which shortens the take-off requirements, and sturdy suspension which lets the Aeromobil take-off and land on rough terrain.

Unveiled in Vienna, the model has a range of 430 miles and a top air speed of 124 mph. According to CNN, Co-founder of the company Juraaj Vaculik said that “the technology now is so accessible and at such a high level. Carbon fiber materials, high-tech technologies; 10 years ago these things were just so expensive and out of reach for small teams.”

Aeromobil hopes to launch the car in 2017, but it already has some stiff competition.

According to Daniel Lubrich, the managing director of Krossblade Aerospace Systems, “it has to be a vertical take-off and landing-I think this idea of an aircraft you can drive on the street but you still have to find an airport for is nice, but it doesn’t really solve the problem.” His Arizona based team created the concept for a hybrid five-seat transformer airplane called a SkyCruiser.

The SkyCruiser has foldable wings and four foldable rotors with electric motors powered by a Wankel rotary engine generator. The quadcopter will allow the car to take off vertically from a traffic jam, eliminating the need for a runway. Once in the air, it would switch from horizontal flight, using two 150 bhp electric motors in the tail to power it through the air at more than 300 mph. The creators claim it could fly from Los Angeles to San Francisco in little more than an hour; therefore, making it faster than any other drivable aircraft currently available.

On the ground, its 31 foot wingspan can be stowed, its four rotors retracted and electric motors in the wheels can drive the vehicle along the road at 75  mph. Yet, with a length of 8.4 meters (27.5 feet), it won’t be as easy to park. Lubrich says that the hybrid could fly almost three times faster that competing products.

Currently its prototype, a model called the SkyProwler, has worked according to plan; moreover, the company predicts that it is only a matter of time before it can be up-scaled into a five-seat, fully operational flying car.

Will you be purchasing a flying vehicle in 2017?