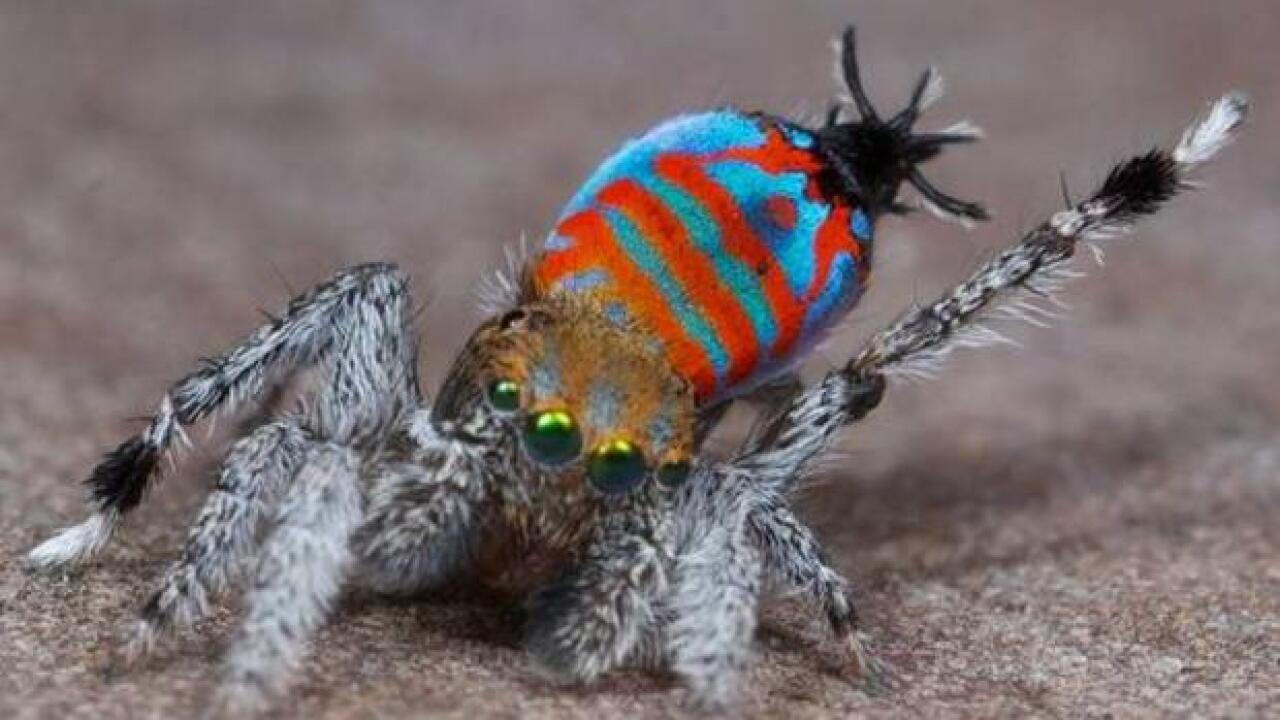 A male of the peacock spider species Maratus jactatus, which is nicknamed Sparklemuffin, lifts its leg as part of a mating dance.

Queensland, Australia – Two beautiful new species of the peacock spiders nicknamed “Skeletorus” and “Sparklemuffin” have been discovered in Australia by a graduate student.

Madeline Girard, is a  graduate student at the University of California, Berkeley who studies spiders. She discovered the species Maratus jactatus, which has blue and red stripes on its abdomen, in southeast Queensland, and gave it the the nickname Sparklemuffin.

Girard has named the other species Skeletorus, although its official name is Maratus sceletus, because it has white marks on its black body, creating the image of a skeleton. The Sparklemuffin reportedly looks akin to previously discovered peacock spiders, while the Skeletorus looks different from all other known species in the group.

Peacock spiders get their name from their bright colors, and dancing courtships.

According to CBS, entomologist, Jurgen Otto says that the Skeletorus “looks dramatically different [from] all other peacock spiders known to date, making me think that this group is perhaps much more diverse than we thought.”

The Sparklemuffin and Skeletorus, along with the three other known species with the calcitrans, otherwise known as the peacock spider group, share similarities, many of which include the way they perform their mating dances.

The males tend to display a flap-like body part called a fan which is adorned with a pattern of bold stripes, and they raise a single leg to display it to the female.

Otto said he watched the Skeletorus perform the mating dance, and “when [the male] got within a few centimeters of the female, he exploded into a firework of activity-the spinnerets were extended and flicked around at an amazing speed, one of the legs was flexed like he wanted to show off his muscles, and he moved constantly from one side of the grass blade to the other.”

The spiders are very small, only measuring between 3 and 7 millimeters long. Thus, being able to view the mating dance is an amazing opportunity. The addition to the peacock spider family is raising hope in the science community that there will soon be more discoveries about the elusive arachnids.