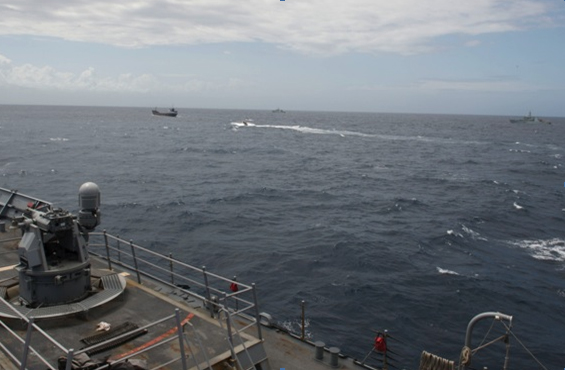 Caribbean Sea – The Norfolk-based frigate USS Kauffman, its embarked Coast Guard Law Enforcement Detachment (LEDET) and two Canadian warships seized $33.9 million worth of cocaine from a freighter in the western Caribbean on February 28th. Eight crewmen on the boat were arrested in the bust, and 1,017 kg of cocaine was seized.

The suspected smuggling vessel was spotted during a routine patrol in support of Operation Martillo. Kauffman’s embarked LEDET boarded the and seized the illicit cargo.

On board the vessel, the LEDET faced difficult conditions as the seas grew increasingly more violent and the vessel began to take on water. With the assistance of USCG LEDETs embarked on the Canadian ships HMCS Goose Bay and HMCS Shawinigan, the Coast Guard discovered illicit cargo in a hidden compartment.

The Kauffman took custody of the eight crewmembers and narcotics. A Rescue and Assistance team from the Kauffman was sent to the smuggling vessel to make a seaworthiness assessment and determine if the ship could be safely towed to a safe location, as the vessel was taking on water due to a failed bilge pumping system.

Detailed assessments determined that the ship posed a significant risk to personnel and that safest course of action was to scuttle the ship as a danger to navigation. That evening the Kauffman sank the smuggling vessel off the coast of Panama.

The Kauffman is currently deployed to the 4th Fleet area of operations in support of Operation Martillo.