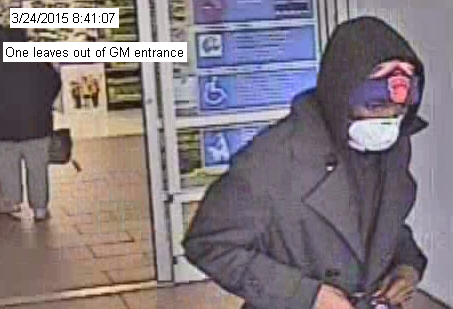 Suffolk, Va. – Suffolk police are looking for four men who they say are involved in a credit card fraud incident in which they attempted to use the victim’s credit card to make a purchase at Walmart on North Main Street on the morning of March 24, 2015.

On the night of March 23, 2015 or the early morning of March 24, 2015, police say several vehicles in the East Constance Road corridor were the targets of vandalism and thefts of articles from within. The credit card that the suspects attempted to use had been reported stolen from one of the vehicles, police say.

Anyone with information is asked to contact Crime Line at 1-888-LOCK-U-UP℠. When calling Crime Line, callers do not have to give their names or appear in court.

Citizens can also utilize TipSoft to anonymously submit crime-related tips through the Web, a text message, or from any Android or iPhone mobile device with the TipSubmit mobile app.

Tips can be submitted by visiting http://www.suffolkva.us/crimelinetips, or by texting the word “CRIMES” (274637) with the keyword SPDVATIP.

TipSoft also supports users’ ability to submit videos or photos using the TipSoft mobile app. If information leads to an arrest, the caller or “tipster” could qualify for a reward of up to $1,000.