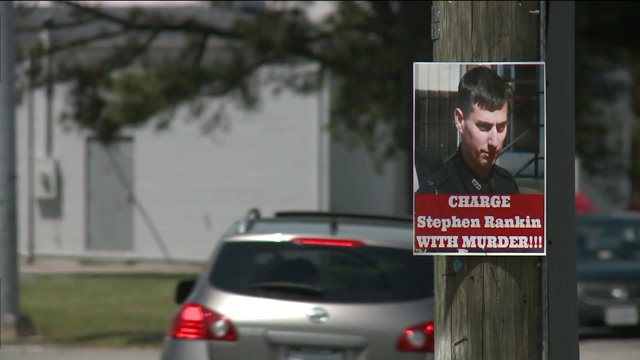 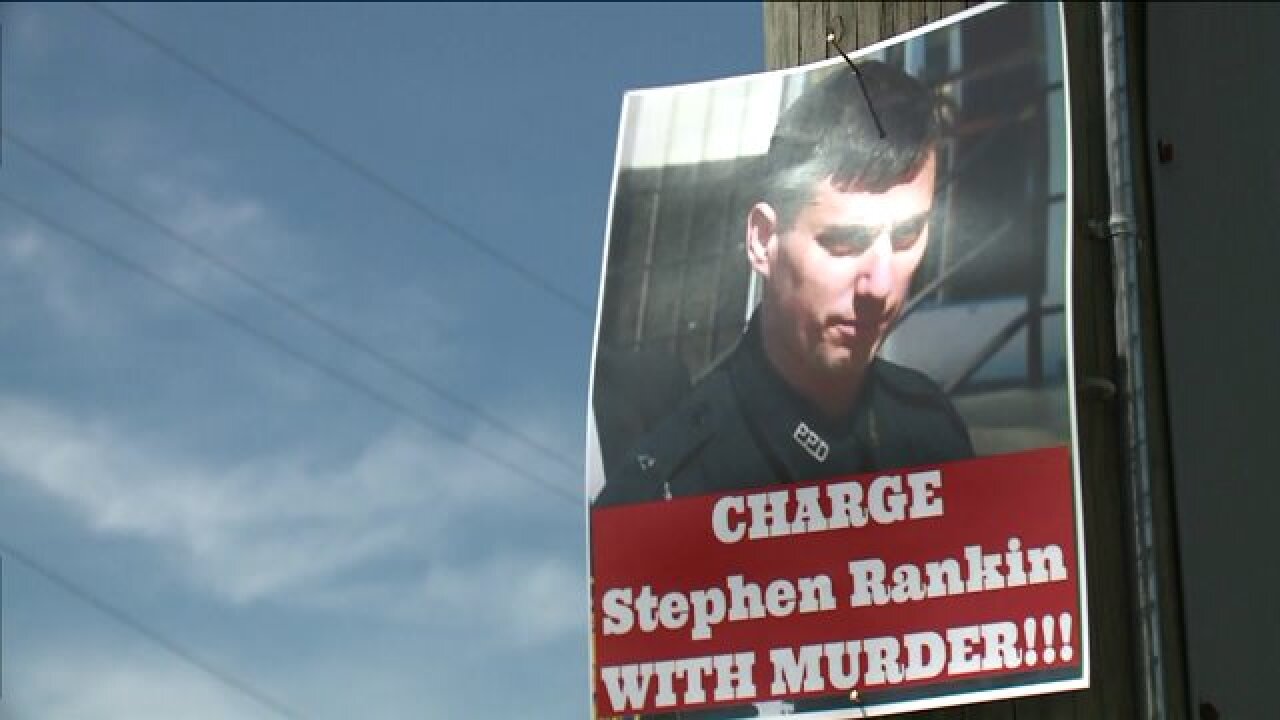 Portsmouth, Va. - Signs demanding murder charges for the officer responsible for shooting and killing William Chapman are hung up on trees in Portsmouth.

They read, "Charge Stephen Rankin with murder." NewsChannel 3 is aware of two spots along High Street where they can be seen near Peninsula Avenue and London Boulevard.

Officer Rankin shot and killed William Chapman last week in a Walmart parking lot, according to two NewsChannel 3 sources. We also know he shot and killed Kirill Denyakin in 2011.

Danny Donovan was friends with Denyakin.  He said, "I hope that it opens K`s case back up."

Donovan does not think his friend got justice; however, a grand jury strongly disagreed with him and cleared Rankin of any wrong doing in the shooting death of Denyakin.

Now Officer Rankin's actions are being looked at again.

A witness told NewsChannel 3 Chapman and the officer fought, Chapman hit a Taser out of the officer's hand then charged at him when the officer had his gun drawn. Virginia State police are leading the investigation.

We've asked State Police to give us the officer's perspective of the situation; however, they've refused to answer our questions and say it's an active investigation.

Denyakin's family hopes this new case will put their case back into the limelight.

A police source and an officer of the court confirm to NewsChannel 3 that Portsmouth Officer Stephen Rankin shot and killed the 18-year-old in the Walmart parking lot last week after they were called about a shoplifter.

Officer Rankin shot and killed another man while on patrol in 2011.

A prosecutor brought a voluntary manslaughter indictment against Officer Rankin in that case but a grand jury returned it – not a true bill – which basically means there wasn’t enough evidence against the officer according to the current Commonwealth Attorney's Office in Portsmouth.

They wouldn’t comment any further on the previous administration’s decisions.

She said she was the one who called police to report her son missing.

"I just heard it was a child that was 18, so when I called 911, they asked my son's name and I said William Chapman,” she recalls.

State Police confirm it was the mother who reached out to Portsmouth Police first, but they say these things take time.

They first needed to verify Chapman's identity through fingerprints, which took until 4:30 in the afternoon.

They said they did not have a good address for Candy Chapman.

Wednesday, State Police still would not confirm what our sources have already told us – that Officer Rankin was the officer involved in the shooting. They say agents want to protect the integrity of their investigation.

Chapman was shot in the face and the chest according to the medical examiner’s office. State police are not releasing what Chapman was accused of stealing from Walmart or if he had a weapon.

Officer Rankin continues to work administrative duties until State Police finish their investigation; however, they say they cannot give an estimate on how long it will take.

They say his death has been ruled a homicide, but that doesn`t mean murder.

On Wednesday, the NAACP held a press conference about the shooting in the Walmart parking lot as well as another shooting that occurred in Portsmouth involving an officer back in March. Walter Brown was shot and killed by an officer inside of his home.

Both families spoke at the press conference about the pending investigations.

When asked if they had anything to do with the posters, Chapman's mother responded.

"I have a shirt that says rest in peace, RIP to my son. There's a poster out there that says he's a murderer, he should be prosecuted. Which one do you think is the best? My shirt or should his poster be taken down? Should I take my shirt off?" said Candy Chapman.

A cousin of Chapman's also answered the question.

The investigations into both Portsmouth Police shootings remain ongoing at this time. As with any criminal investigation, these cases can take substantial time to complete due to multiple variables. This would include evidentiary analysis and testing that are still being conducted by the Virginia Department of Forensic Science. The Office of the Medical Examiner is also still completing its autopsy report.

In order to ensure a thorough and objective investigation and review by the Commonwealth’s Attorney, we ask the community to be understanding of the complexities of these investigations.

Man shot by Norfolk Police pleads guilty, gets one year in prison

Mother of teen killed by Portsmouth police: ‘He didn’t deserve this’