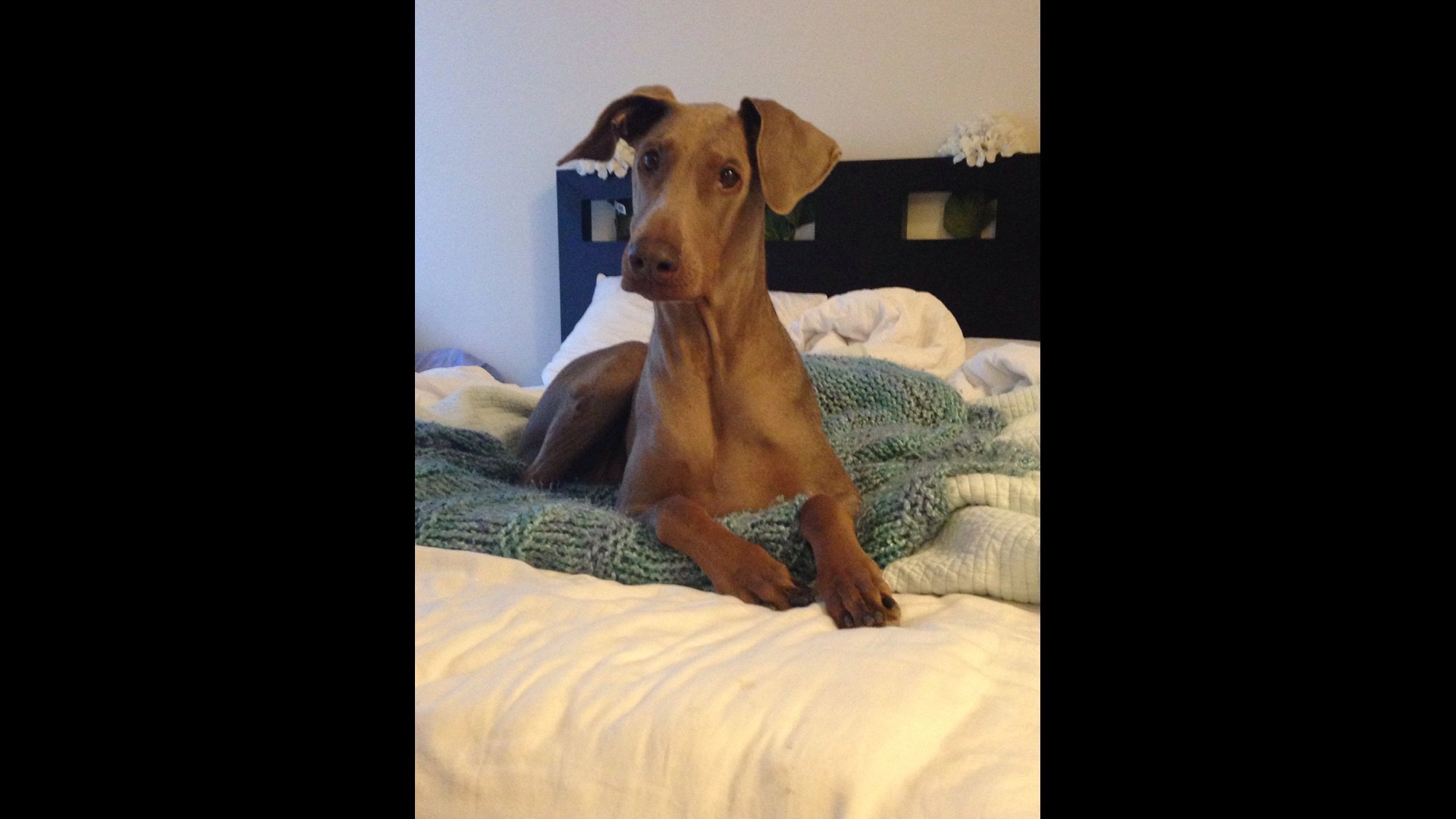 (CNN) — You might call her a watchdog, because this Boston area Doberman really has a thing for timepieces.

“My husband, who’s the most calm person that I know, called me up and said, ‘I’m not quite sure if I should panic,’ ” said Courcelle’s wife, Michele Parkinson.

The 80-pound Doberman, whom her owners describe as “more goofy than scary,” had pulled down a basket of wrist wear from a shelf in their bedroom and eaten nearly all the contents.

Parkinson knew that Mocha wouldn’t be able to pass all that leather on her own. The couple took her to the MSPCA’s Angell Animal Medical Center, a 24-hour emergency and specialty hospital, where a veterinarian performed a 3-hour endoscopy to explore the contents of her belly.

Mocha was a repeat offender: Just last summer, she got very sick and had to have emergency stomach surgery after a piece of plastic from an orange juice container perforated her intestine. She had 28 staples down her belly and 10 inches of intestine removed, Parkinson said.

Fortunately this time, the jewelry remains were still in Mocha’s belly and had not made their way into the digestive tract.

The X-ray, however, was disturbing.

Parkinson and her husband were just expecting to see a couple metal pieces.

“It just looked like a Christmas tree and I almost threw up,” Parkinson said.

The veterinarian removed “about a pound of leather straps and metal pieces and detritus” during the endoscopy, and let nature take its course for the remaining pieces, MSPCA spokesman Rob Halpin said.

As of Friday, Mocha was no worse for wear.

The hospital sees dozens of cases each week of dogs ingesting foreign objects, and is trained to look for the symptoms of blockages — typically lethargy, not eating and vomiting, Halpin said.

They once saw a golden retriever who had stopped eating and found 43 pacifiers in her belly. (Apparently she was taking them from babies at the park.) And there was the 100-pound bull mastiff who ate his owner’s brie that was set out for a party — along with the cheese knife.

The night Mocha stayed in the hospital, a nervous Parkinson stayed awake reading stories about dogs ingesting watches and other objects.

She found one article about a Newfoundland whose owner knew something was awry only when he heard an alarm go off from his dog’s belly.

“We’ve taken every imaginable thing that could fit down the gullet of a dog out with surgery,” Halpin said. “There’s some evolutionary traits that some dogs have that lead them to eat first and think later … and some of them are so food motivated that anything with a scent could be associated with food, and they go for it.”

Mocha likes to suck on fleece blankets and has been known to eat rubber ear buds or hair elastics, but nothing like a pile of jewelry, Parkinson said. Her breeder wondered if the dog was acting out of anxiety. That day, Parkinson had left Mocha in a different apartment the couple owns that the dog wasn’t as used to. The breeder told Parkinson that Dobermans are particularly known to get anxious and do these sort of things.

“She had a dog that actually consumed her whole dog bed,” Parkinson said.

From now on, Parkinson said she will put Mocha in a crate if the dog will be staying somewhere new.

Follow-up X-rays Monday on Mocha showed a few pieces of metal left, “but they were moving along” and the vet expected her to pass them naturally.

But now that she thinks of it, the timing of this whole incident is a little suspicious.

“My husband was all excited about the new Apple watch, but couldn’t justify a reason to purchase it since he owned three watches,” she said. “I am convinced that he and Mocha joined forces here to destroy all of his current watches in order to make room for Apple’s new watch.”