“It’s a battle getting him into pretty much any shoe,” Jaimes’ mother Melissa Rossi-Jaurigue says. “It takes me about 20 minutes at least to get him to put them on. At least.”

But Jaimes’ distaste for shoes is something more than a case of a stubborn 5-year-old. Jaimes is on the autism spectrum, Rossi-Jaurigue says, and has ADHD and sensory issues.

And while Rossi-Jaurigue knew Jaimes’ refusal to wear shoes was always going to be a minor inconvenience, she never dreamed his predilection — along with a message to a multi-national company– would change her family in ways she could hardly imagine.

Until recently, there was one style of shoes that Jaimes would wear with only a minimal amount of fuss. But they aren’t exactly suitable for all situations, especially formal ones.

“He didn’t like any shoes, except sometimes Crocks,” Rossi-Jaurigue says. “And Crocks are not the coolest shoes.”

In a quest to find something other than Crocks, Rossi-Jaurigue and Jaimes spent hours in stores and online trying to find another style he liked. It was a frustrating, tedious experience, Rossi-Jaurigue says. Jaimes would only say no, no, no; especially if the shoes weren’t visually stimulating.

With Jaimes’ being on the autism spectrum, Rossi-Jaurigue knows sometimes only things that are visually striking can grab Jaimes’ attention.

It was a red, Converse Rockaway Slip that did just that.

“He liked the slip,” Rossi-Jaurigue says. “We were looking online and he liked them.”

Of course, Jaimes only wanted them in red. But searching for a specific style in kid’s size 13 isn’t easy. Rossi-Jaurigue checked all the online retailers

and came up empty. She couldn’t even find them on Converse’s website. At a loss, Rossi-Jaurigue sent a message to the general inquiries page with Converse, asking the shoe giant if there was any way they could round-up a red Rockaway Slip, Kid’s size 13.

“I told them I have a son who is on the autism spectrum and he likes these shoes,” Rossi-Jaurigue says. “I asked if there was any way they could locate them, I didn’t care what they cost.”

“Our son is thriving, he is smart. But as parents, everyday is a challenge with a child on the spectrum.”

Not expecting much from a general inquiries submission, Rossi-Jaurigue was surprised when she received a return email a few minutes later. A customer service representative asked for an item identification number, which Rossi-Jaurigue supplied. The hard-working mother of two then received another email.

We found them, the representative said, so shoes are on the way.

Rossi-Jaurigue immediately wrote back a long-thank you letter, asking how much the company would charge. But there representative waved her off.

There would be no charge, the Converse rep said. In fact, Converse would be more than happy to send her son multiple pairs of the shoes in different sizes, so the Rossi-Jaurigue family didn’t have trouble finding more shoes as Jaimes grew.

“They said, ‘I understand how hard it can be,'” Rossi-Jaurigue says. “They said they knew a child who was on the spectrum, and they were more than happy to help out.”

Rossi-Jaurigue was floored by the generosity of a stranger.

“It was such a simple, small gesture,” she says. “But I fell to my knees.”

Since Jaimes was born, Rossi-Jaurigue and her husband, an active duty Army soldier stationed at JBLM in Washington, had never come out publicly to discuss their son’s diagnosis on the autism spectrum. It was her and her immediate family’s business, she thought. Why should people need to know about the difficulties they faced?

But after the Converse customer service representative reached out to her, sympathizing with her child’s needs and showing nothing but understanding, Rossi-Jaurigue and her husband came to a decision. They would tell their friends and family about Jaimes’ needs, and aknowledge publicly he was on the spectrum. Because if a stranger could show compassion and understanding, wouldn’t too their close-knit support system?

Perhaps posting it publicly would also help Rossi-Jaurigue and her husband in coping, too.

“It’s been a pretty hard pill for us to swallow,” Rossi-Jaurigue said. “Our son is thriving, he is smart. But as parents, everyday is a challenge with a child on the spectrum.”

Rossi-Jaurigue posted a short blurb on her Facebook page after talking with the Converse representative. She told her story about the shoe giant, and how the company went out of their way to help her and her family, make them feel cared for.

Immediately, love and support from Rossi-Jaurigue’s friends and family poured in. She was amazed.

“Numerous people reached out to me,” she says. “They said our story inspired them. Many were even encouraged to talk about their own children on the autism spectrum.”

After five boxes of shoes were delivered from Converse Thursday, Rossi-Jaurigue says if anything, the experience has taught her that people care. From strangers to close friends.

It’s also taught her how a small, seemingly insignificant gesture from a caring stranger can be monumental.

“This tiny little gesture was life-altering to me,” she says. 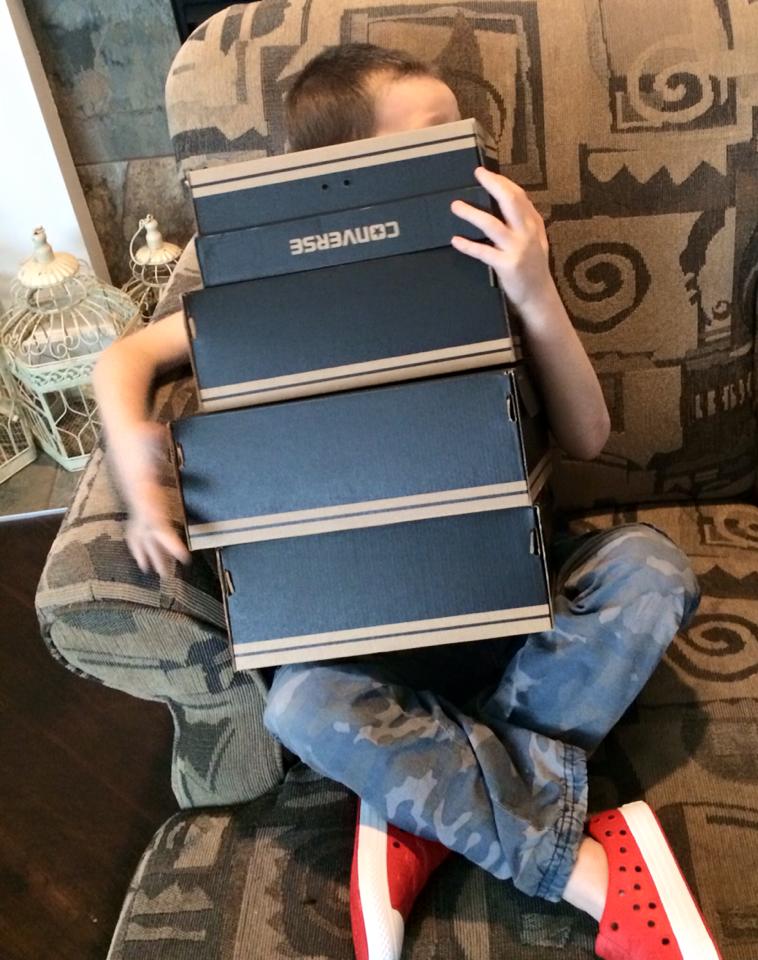