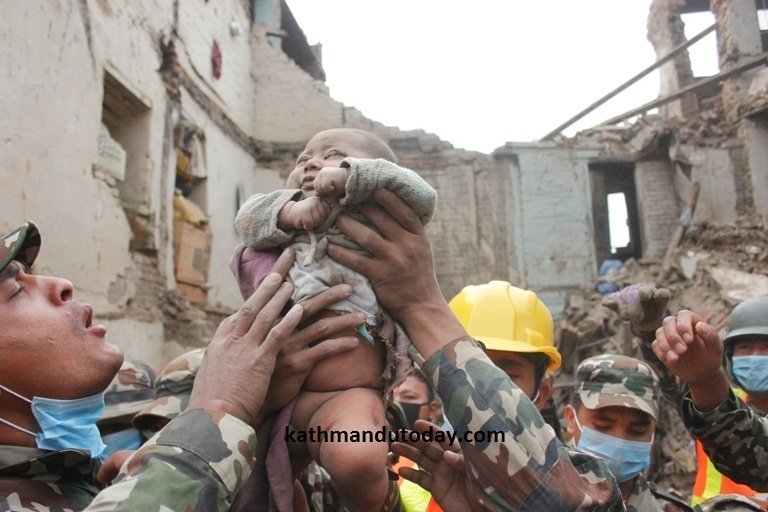 KATHMANDU, Nepal (CNN) – A 4-month-old baby was rescued from a destroyed building in the town of Bhaktapur at least 22 hours after the quake struck, the newspaper Kathmandu Today reported.A Nepali military team had failed to notice the child during its search but returned after his cry was heard, the newspaper said.The little boy, whose name is Sonit Awal, was reported to be in stable condition without any internal injuries, according to initial examinations.

Rescuers in Nepal have pulled a man from the wreckage of a building where he was stuck for a staggering 80 hours after the devastating earthquake that hit the country Saturday.

His survival is unusual, as experts say it’s rare for injured people who are trapped to hold out for longer than 72 hours after a disaster.

The man, Rishi Khanal, was saved after a French search and rescue team found him under the rubble on the outskirts of Kathmandu, the capital, around noon Tuesday, said Pushparam K.C., a spokesman for the Armed Police Force of Nepal. The team used specialized gear that detects signs of life, he said.

But it took about 10 more hours for the French team and police officers to dig him out, the spokesman said.

A police video of the rescue showed the teams drilling through concrete to reach Khanal’s location and then hauling him up through the hole. They then carried him out of the ruined building on a stretcher.

“It seems he survived by sheer willpower,” said Akhilesh Shrestha, a doctor who treated Khanal, according to the Reuters news agency. Khanal, 28, was possibly suffering from a broken leg, Reuters reported.

His story of survival isn’t the only one to emerge from the terrible destruction wrought by the quake, which has killed more than 5,000 people.

A mother trapped for 36 hours

Tanka Maya Sitoula, a 40-year-old mother of four, was at home in Kathmandu when the earthquake shook the city, bringing the five-story building down around her ground-floor apartment.

She endured 36 long hours trapped in a room before an Indian rescue team freed her. She escaped without injury, apparently protected by a beam.

Sitoula says she remained confident she would survive amid the rubble.

“I heard people making noise outside, so I thought I would be rescued,” she said, as she and her family sheltered on the grounds of a nearby school.

What did she do for 36 hours? “I was just lying down,” she said. “There was no room to move here and there.”

Sitoula’s husband, Mahendra, a butcher, said he called out for help for hours after the quake, as he could hear her shouting in the rubble of the collapsed building.

It took 18 hours before the necessary help arrived, he said. And it took another 18 hours to free her.

Days beneath a collapsed seven-story building

Jon Keisi was buried for more than 60 hours under the wreckage of a seven-story building in Kathmandu that came tumbling down around him during the quake.

Rescue workers flown in from Turkey had to help carve a tunnel deep into the debris to reach him.

Encased in an orange stretcher, he was lifted to safety Tuesday.

But he cried out in pain after his rescuers set him down, shaking his head from side to side. One of the hard-hat-wearing search team members that crowded around him called for water.

Keisi was injured and dehydrated, but the rescuers said they were confident he would survive.