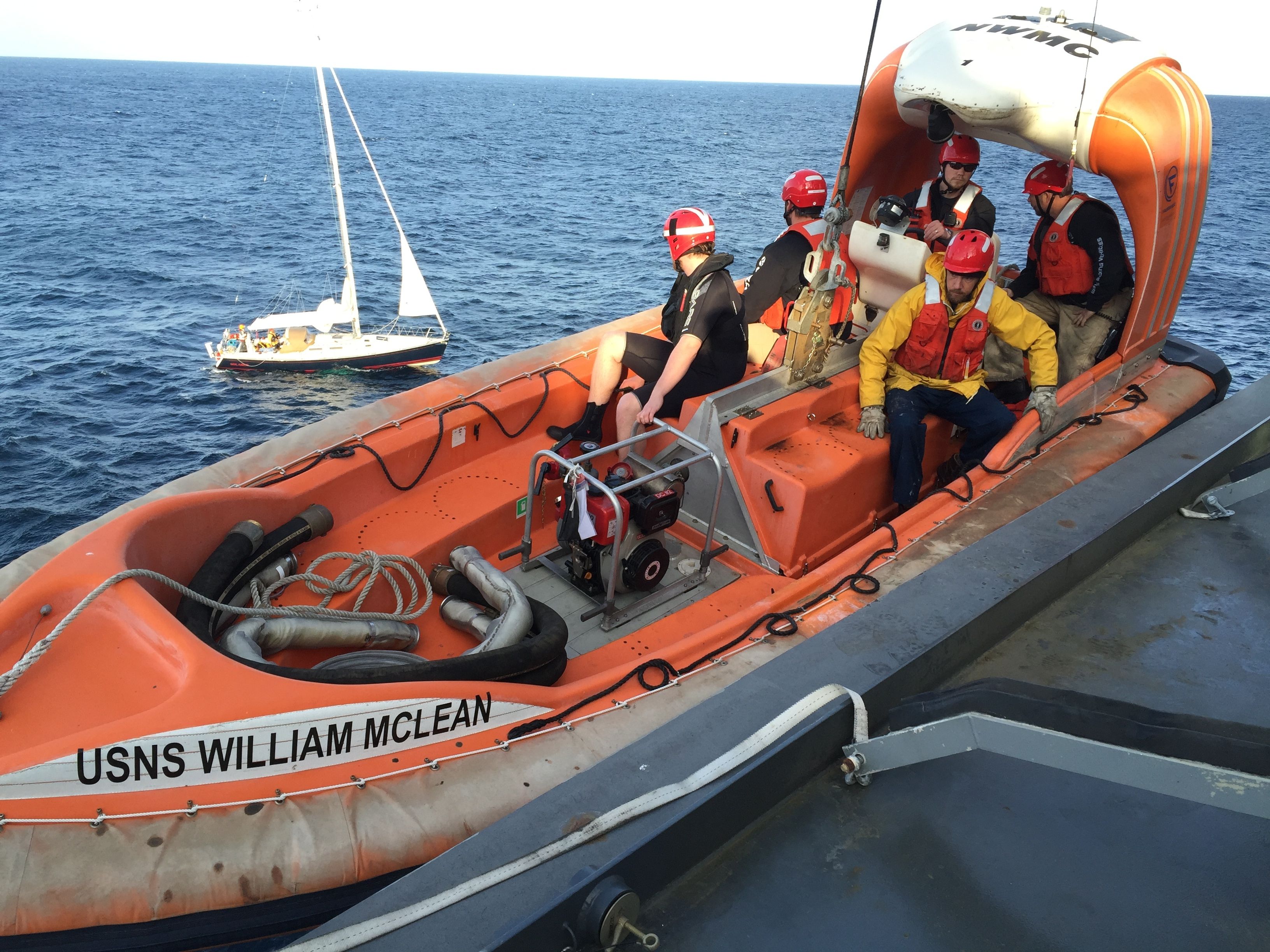 The McLean received a distress call from the Solarus around 6:10 a.m. Thursday morning. The McLean immediately sailed towards the small craft to render assistance.

It was at that time that the McLean also established communications with the Coast Guard’s 5th District Command Center, U.S. Fleet Forces Command and Military Sealift Command Atlantic and apprised them of the situation.

Solarus reported that they were taking on water through a two-foot-long crack in the hull and that their bilge pump could not keep up with the inflow of water. McLean launched one of her fast rescue boats with a P100 dewatering pump

USNS William McLean stopped about 100 yards from Solarus and the decision was made to bring Solarus alongside McLean to shelter the sailboat from the choppy seas and to facilitate the dewatering and repair of the sailboat.

The crew of the sailboat consisted of two adult males who were taking the Solarus from Charleston, SC to Newport, RI. They were in good physical condition, did not require any medical care, but, according to Captain White, were obviously concerned to be that far off the coast in a sail boat that was taking on water and were relieved to be assisted by USNS William McLean.

The fast rescue boat crew was able to dewater Solarus using the P100 pump, with approximately 400 gallons of water pumped off.

According to Captain White, this revealed the source of the flooding, which was a two foot long crack in the starboard bow of the sailboat.

After assessing the damage to the sailboat, a list of materials was passed up to the ship. The deck department quickly assembled the damage control items needed to affect a temporary repair to the sailboat’s hull and lowered them down to the boat and repairs were made to control the flooding.

McLean also refueled Solarus and supplied a hot breakfast to the Solarus’ crew.

Once the crack in the sailboat’s hull was repaired, McLean recovered her fast rescue boat and got back underway, proceeding to rendezvous with a 47-foot Motor Lifeboat crew from Coast Guard Station Ocean City, Md. Solarus maintained station about 100 feet off of McLean’s port side, so that the sailboat was sheltered from the four to six foot seas and 25 knot northerly winds. McLean and Solarus proceeded in this fashion for about two hours until they rendezvoused with the Coast Guard motor lifeboat crew.

Two Coast Guard motor lifeboat crewmembers boarded Solarus and then escorted Solarus towards Ocean City, MD. McLean facilitated this personnel transfer and remained in company with Solarus and the Coast Guard until the motor lifeboat crew regained radio communications with Coast Guard Station Ocean City. At this point, USNS William McLean was thanked for her assistance and was released from the scene to proceed on duties assigned.

McLean is one of 15 Navy Combat Logistic Force (CLF) ships that provide fuel, food, ordnance, spare parts, mail and other critical supplies enabling the fleet to remain at sea, on station and combat ready for extended periods of time.

All CLF ships are government-owned and crewed primarily by civil service mariners.