Virginia Beach, Va. (WTKR) - Virginia Beach crews put out a fire at a McDonald's restaurant Friday morning that happened when a van slammed into the restaurant.

It happened at the General Booth Boulevard and London Bridge Road intersection.

A red van attempting to make a left hand turn onto London Bridge lost control after suffering from a medical emergency.

"I saw the van come through the intersection and careened over the embankment and hit a BMW that was in the drive-thru line and the crashed into the building and the fire started immediately," witness Jim Gregory told NewsChannel 3's Gabriella DeLuca.

Investigators have determined that the van was traveling northbound on General Booth Boulevard and attempting to make a left turn onto London Bridge Road. That's when the driver suffered a medical emergency.

The van traveled straight, hit a pedestrian pole and crossed into the McDonald's parking lot. The van then hit a parked vehicle, pushing that vehicle into another, before continuing towards the drive-thru window, hitting a vehicle waiting at the window and then coming to rest after hitting the building.

A natural gas leak complicated the firefight before it was secured before noon.

The driver and passenger in the vehicle that hit the building and one McDonald's employee were sent to Virginia Beach General Hospital. A fourth injured person went to the hospital on their own.

Frances Stonum says she pulled the driver of the van out after it had crashed. She says his wife was yelling that he was having a seizure.

Hospital officials report that all of the injured people are in good condition at this time.

Both people inside of the van were able to get to safety thanks to Stonum's quick action. She refused to be called a hero.

"I'm not a hero. I'm not a hero at all. I don't want to be called a hero. Like I said, I would do anything I would want done for someone I love or anybody! What if there had been babies in the back of that van? Those people could have burnt alive," says Stonum.

General Booth Boulevard and London Bridge Road is now OPEN to all traffic. 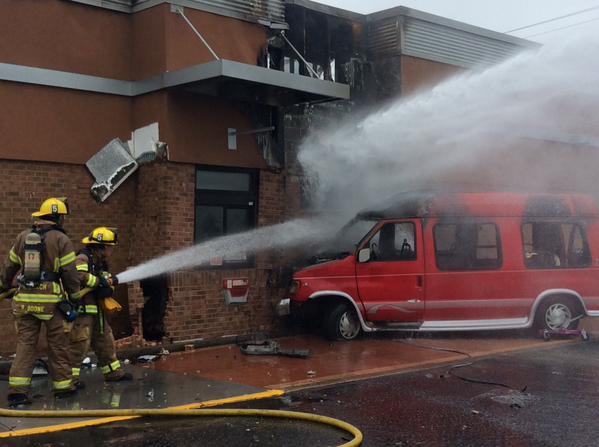