Jamestown, Va. - The Jamestown-Scotland ferry arrived in Jamestown with one more passenger than it departed with early Wednesday morning.

Surry couple Johnathan and Kayla Cline boarded the ferry on the Surry side at about 2:38 am, telling the crew Kayla was in labor and they were headed to the closest hospital in Williamsburg.

The ferry left early at 2:58am, according to VDOT’s Laurie Simmons,  and the crew called James City County rescue to have an ambulance waiting at the dock when they arrived.

However, the baby girl did not want to wait, and little Emmaleigh Jane Cline was born at 3:06 a.m. in the couple's pickup truck on the boat, not even halfway across the James River.

A health care worker held a flashlight and ferry workers stood by as Johnathan caught his newborn daughter who weighed 6 pounds, 12 ounces.

Emmaleigh was born with her umbilical cord wrapped around her neck, but her father knew what to do and kept it away from her neck until they arrived at the waiting ambulance.

Now at Sentara Williamsburg Regional Medical Center, little Emmaleigh is healthy and her parents are recovering from the unexpected excitement.

Jonathan Cline is a regular ferry commuter and was familiar with some of the crew members who assisted.   “I can’t say enough good things about the ferry workers,” he said.

Kayla Cline jokes she's ready for someone to write a country music song about the birth, since her baby was born in a truck, on a boat, in the middle of a river.

Now the parents are looking for a mysterious woman in scrubs.

"I don't know who she is but she was in the car behind us," says Jonathan.

They helped this couple deliver the baby on the ferry.

"She was like, alright this is who I am, this is what we're going to do, you'll be alright and that was just really good for me," says Kayla.

She says seeing the scrubs calmed her down.

The woman even helped dad when they ran into trouble when the umbilical cord wrapped around the baby's neck.

"I don't know who she is but I want to thank you," says Jonathan.

The mystery woman may have been driving a PT cruiser.

The parents want you to take action to help find her. They want to thank her for taking action.

"I'd give her a big hug. I'd let her see the baby, let her hold the baby and then say, 'You're awesome! Thank you! She's one in 1 million, she really is," says Kayla.

In case you were wondering, labor and delivery is not covered under VDOT's Dos and Don'ts for the ferry. It is believed to be the first birth ever on the ferry. 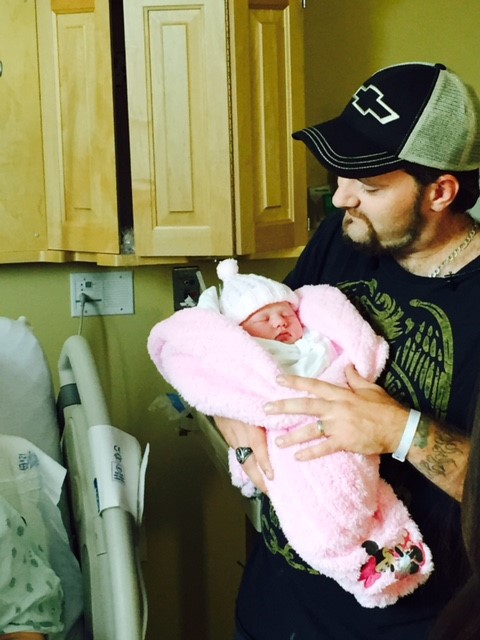