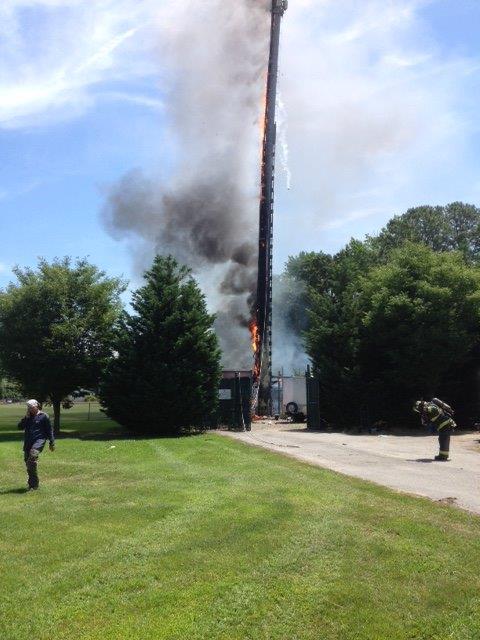 Newport News, Va. – A cell phone tower in the 5800 block of Marshall Avenue caught on fire Monday around noon, according to the Newport News Fire Department.

Fire Chief Stephen Pincus says a company was working on the tower doing some welding when some insulation to the wires caught on fire.

Crews arrived to find a massive amount of fire at the base of the tower and wires burning along the full length of the tower.

With heat index values already over 100 degrees in Newport News, fire crews had some difficulty putting the fire out because the heat was so taxing. It took approximately 25 minutes to get the fire under control.

Cell phone coverage in the area may be affected. Officials from Verizon and Sprint were on scene to assess the damage. Virginia Power was summoned to the scene to disable all electrical power going to the tower.

The tower is located on property in between Heritage High School and Achievable Dreams Middle & High School. Students were not in school but teachers were at both locations. No one inside the school was in any danger at the school.