Is a secret glue-filled satellite the answer to a space debris threat? 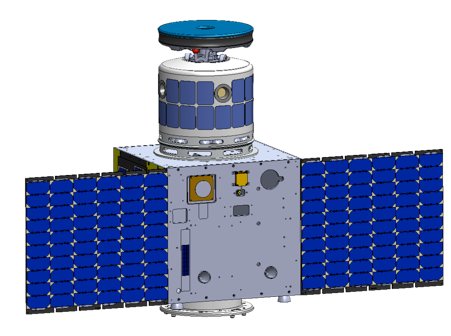 LE BOURGET, France — Every day, millions of pieces of space junk fly around, hundreds of miles above our heads, each posing a potential threat to astronauts and satellites. It’s a tricky problem — but is a sticky solution just around the corner?

Scientists have puzzled for years over how to clean up the belt of debris — defunct space hardware, jettisoned rockets, nuts and bolts — traveling at speeds of up to 17,500 miles an hour around the globe.

Now Singapore-based Astroscale says it has found the answer: glue. And not just any glue, but a secret recipe substance which works even in space, where, it says, many traditional adhesives do not.

The company plans to send the fixative into space on board a two-part satellite, the prototype of which is scheduled for launch in 2017.

According to NASA, more than 500,000 pieces of debris bigger than a marble — some 20,000 of those larger than a softball — are circling the Earth.

There are also “many millions” of pieces so small that they cannot currently be tracked.

Anyone who’s seen the Sandra Bullock movie “Gravity” can be only too aware of the potential devastation a large item of space debris could wreak, but experts say even the tiniest speck can cause serious damage when orbiting at high speed.

The International Space Station regularly has to reposition itself out of the way of potentially hazardous space junk; in 2012, a piece of debris from a Russian Cosmos satellite passed close enough to the ISS that the station’s crew was ordered into escape pods as a precaution.

And during the Space Shuttle program, NASA says several shuttle windows had to be replaced because of damage caused by loose paint flecks.

Astroscale’s ADRAS-1 mission is designed to “tidy up” space, clearing away medium to large pieces of junk using a two-part satellite, made up of a carrier — nicknamed “Mother” — and a catcher, named “Boy,” tucked inside.

“The ‘Boy’ is kept inside the ‘Mother’ until the right moment,” explains Yasu Yamazaki, Astroscale’s marketing manager. “The mothership decides where it needs to be, it seeks out the debris and goes around and around it, and decides when to deploy the ‘Boy.’

“The ‘Boy’ sticks to the debris, and uses its solid fuel thruster to slow down its velocity, forcing it to fall down into the atmosphere, where it burns up.”

The key in such a mission is to avoid causing more problems than you’re attempting to solve: In 2007, China attempted to destroy an old weather satellite using a missile, but in doing so, created even more space junk — an estimated 3,000 pieces of debris.

“It’s simple, but mechanically, if something is complicated, there’s lots of room for mistakes, and we don’t want mistakes in a space environment,” says Yamazaki.