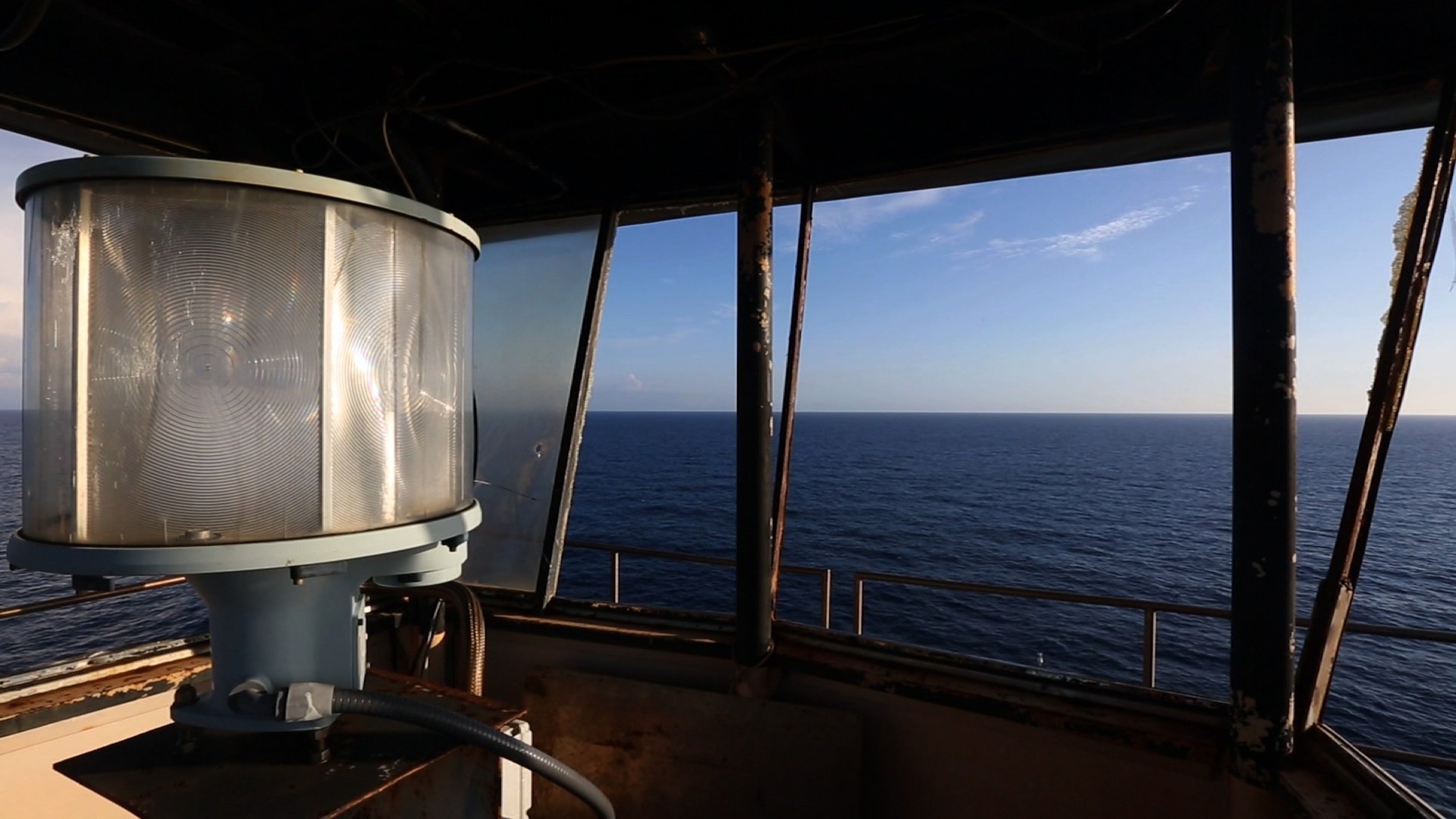 Leaning back in his hammock, Garry Bickett looks over at his brother, Bill. He reflects on the day and the beauty of the sun setting across the North Atlantic Ocean.

“This is it, right here,” Garry says. Bill smiles back in agreement.

The Bickett family loves the water. Garry and Bill say they were raised with fishing poles in their hands and their feet in a boat. Fishing became more than a pastime as they aged, too. Both have used the sport to build relationships with their sons.

“My son Jonathan and I, that’s our time that we’ve spent together all of his life,” Garry says.

Their most recent fishing adventure was unique: The Bicketts spent the night at the Frying Pan Tower.

The ex-Coast Guard light station is located approximately 34 miles off the coast of North Carolina in the Atlantic Ocean. In an age off stress, little work-life balance and constant connectivity, the Pan Tower answers a growing demand for off-the-grid travel. The ocean is an unlikely spot as any for a hotel, but that only adds to its allure.

“Anybody who’s spent any time out in the ocean in North Carolina knows about the Frying Pan Tower,” Garry says. “It’s a fixture of the coast.”

The tower was built in 1964 to help ships skirt Frying Pan Shoals, a nearby shallow area infamous for shipwrecks.

About 20 Coast Guard cadets lived at the tower full-time during the 1960s and ’70s. But the light station was automated in 1979, and the invention of GPS eventually made the tower obsolete.

Like many fishermen, Garry and Jonathan had always been curious about what was inside the light station after it was abandoned in 2004. When Richard Neal bought and restored it in 2010, the opportunity to find out became a possibility.

Jonathan recently scheduled a trip to the tower to celebrate his father’s 60th birthday. Beyond simply getting to the see the tower with his son, Garry shared the experience with eight other family members and friends.They made the journey out in four boats. Hotel guests can also arrive at the hotel by helicopter. Transportation is not included in the $498 per person cost for three days and two nights. The hotel does provide recommendations for chartering boats it if guests do not have their own.

Guests can stay in one of eight ocean-facing rooms, five of which have twin beds; three have queen-sized beds. Basic meal supplies are provided, but ingredients for specific meals must be brought by guests. Visitors generally cook, eat and clean-up together in the full-sized kitchen, although a chef can be requested while making reservations.

During the day, the Bicketts kept busy with fishing. The Gulf Stream is a short ride from the tower, making it a convenient base for fishermen. In the evening, the men and their gear were hoisted into the tower one-by-one, 85 feet above water.

The “incredible, 31-hour adventure,” as Garry calls it, included more than fishing, though. When the day’s catch had been cleaned,the group hit biodegradable golf balls from the tower’s helipad, ate dinner and relaxed in hammocks. Under a star-filled night sky, the group oohed and ahhed at a fireworks show put on by Neal.

“Everything that you could imagine of an adventure,” Jonathan said. “It definitely met expectations.”

Despite having watched countless sunsets from the tower, Neal joined the group as the day came to a close. The sunset, coupled with the family’s celebratory event, was something special, he said.

“It’s one of those times that burns itself into your memory… you don’t forget about it because it’s so unusual and so astonishing.”

There will be more fishing trips for the Bickett family and many more hours spent on the water. Yet the adventure and allure of Frying Pan Tower made this journey forever special, Garry said.

“I’ll always know the year I turned 60. That’s the year they hoisted me up to the tower.”