It wasn’t clear what caused the rocket, named Dragon, to fail. SpaceX will conduct an investigation overseen by the Federal Aviation Administration.

It was the third resupply mission to fail in recent months. The three astronauts on the space station have about four months worth of supplies, according to NASA.

Sunday’s flight was carrying more than 2 tons of goods, including 1,500 pounds of food and provisions for the crew.

More cargo missions are planned this summer, including Russian flights on July 3 and July 22, and a Japanese launch on August 16. The next SpaceX flight is scheduled for September 1.

Also aboard the doomed Dragon spacecraft were a new docking device and a water filtration system.

Three space station astronauts, two Russians and NASA’s Scott Kelly, had been awaiting SpaceX’s shipment, which was meant to arrive on Tuesday.

In a tweet from space Sunday afternoon, he said he watched the launch. “Space is hard,” wrote Kelly, who is the brother-in-law of former Arizona Congresswoman Gabrielle Giffords. 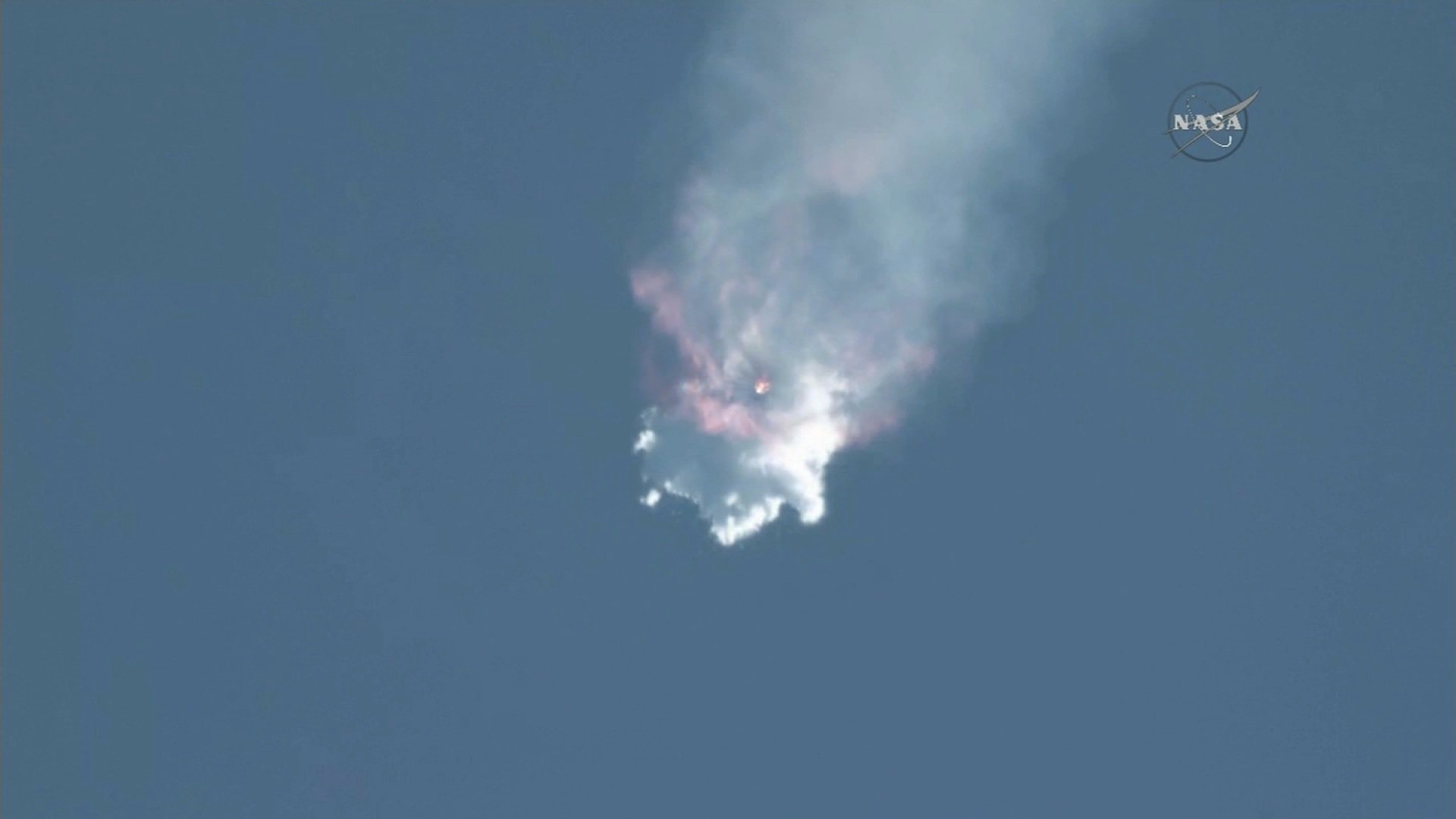 SpaceX — which is headed by Musk — has made seven trips to the ISS under a contract the company has with NASA, the latest of which was completed on May 21. It is the first company to complete a return trip to the space station, a feat previously achieved by only governments.

Dragon was also meant to bring back nearly 1,400 pounds of cargo, including hardware and trash, in its return trip. The spaceship was scheduled to land in the Pacific Ocean off the coast of Baja, California, in about five weeks.

The most recent resupply mission to fail occurred In late April when Russia had to abandon a trip to the International Space Station after its spacecraft carrying 3 tons of cargo lost control.

And last October, a cargo spacecraft developed by Orbital Sciences destined for the ISS exploded just after the company was awarded a $1.9 billion contract with NASA. (Orbital Sciences became known as Orbital ATK after merging with the aerospace arm of Alliant Techsystems in February.)

But those missions failed for different and unrelated reasons than the Dragon mission failed Sunday.

“There were no commonalities, just the fact that it’s space and it’s difficult to go fly,” said William Gerstenmaier, NASA’s associate administrator for human exploration.

Separately, one person died last fall — just days after the Orbital Sciences incident — when a craft developed by Virgin Galactic intended for eventual civilian passengers exploded during a flight over California.

Sunday’s launch from Cape Canaveral in Florida, in addition to resupplying the space station, was supposed to be the third attempt by SpaceX to recover the rocket that launches its spacecraft.

Typically, the expensive rockets that give spaceships their initial lift are discarded into the ocean after takeoff. In an attempt to recover and reuse those rockets, SpaceX developed a floating platform for the ejected rocket to land on.

SpaceX has made two previous attempts to land the first stage of its rocket — once in January and again in April. Both attempts at landing failed.

The ability to recover launch rockets is expected to move space travel further toward a future in which people, satellites and other items can be inexpensively launched into orbit.

SpaceX plans to launch its first rocket with humans on board in 2017.

NASA’s Gerstenmair said the failure of Sunday’s mission does not necessarily affect that timeline.

“We’re going to keep moving forward,” he said, adding that failures in cargo missions can help identify potential problems in spacecrafts with crews on board.