King of Rock n’ Roll gets his own postage stamp 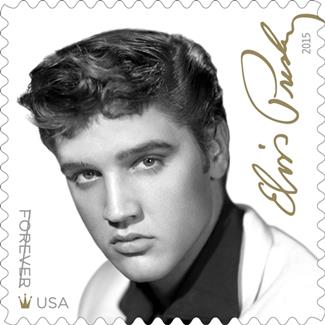 The Elvis Presley Commemorative Forever stamp will be collaborating with Sony Musics RCA/Legacy Recordings in a CD entitled ELVIS FOREVER. Both the stamps and collection will be available at post offices starting August 12th.

You can pre-order the stamps and the commemorative $9.99 CD now at this link for delivery shortly after August 12.

At Graceland in Memphis, Priscilla Presley will join Postmaster General Megan Brennan in the dedication ceremony. This ceremony is also taking place during the Elvis week celebration.

The official stamps features a black and white picture of Elvis, with his signature in gold writing on the right side of the stamp

Another stamp has a picture of Elvis performing at a concert, along with a gold crown on the left side of the stamp.

To this day Elvis Presley is known for influencing thousands of Rock musicians.  During his lifetime, Presley starred in 33 films, recorded 18 number one singles, and racked up 14 Grammy nominations and three Grammy wins. He sold out every one of the 1,140 concerts he performed after serving in the Army. To date, no one has ever surpassed his record for scoring the most Top 40 hits, a total of 114. Presley is the first recording artist to have sold more than one billion albums, cementing his status as the King of Rock ‘n’ Roll.

Elvis was previously honored with a stamp in 1993.