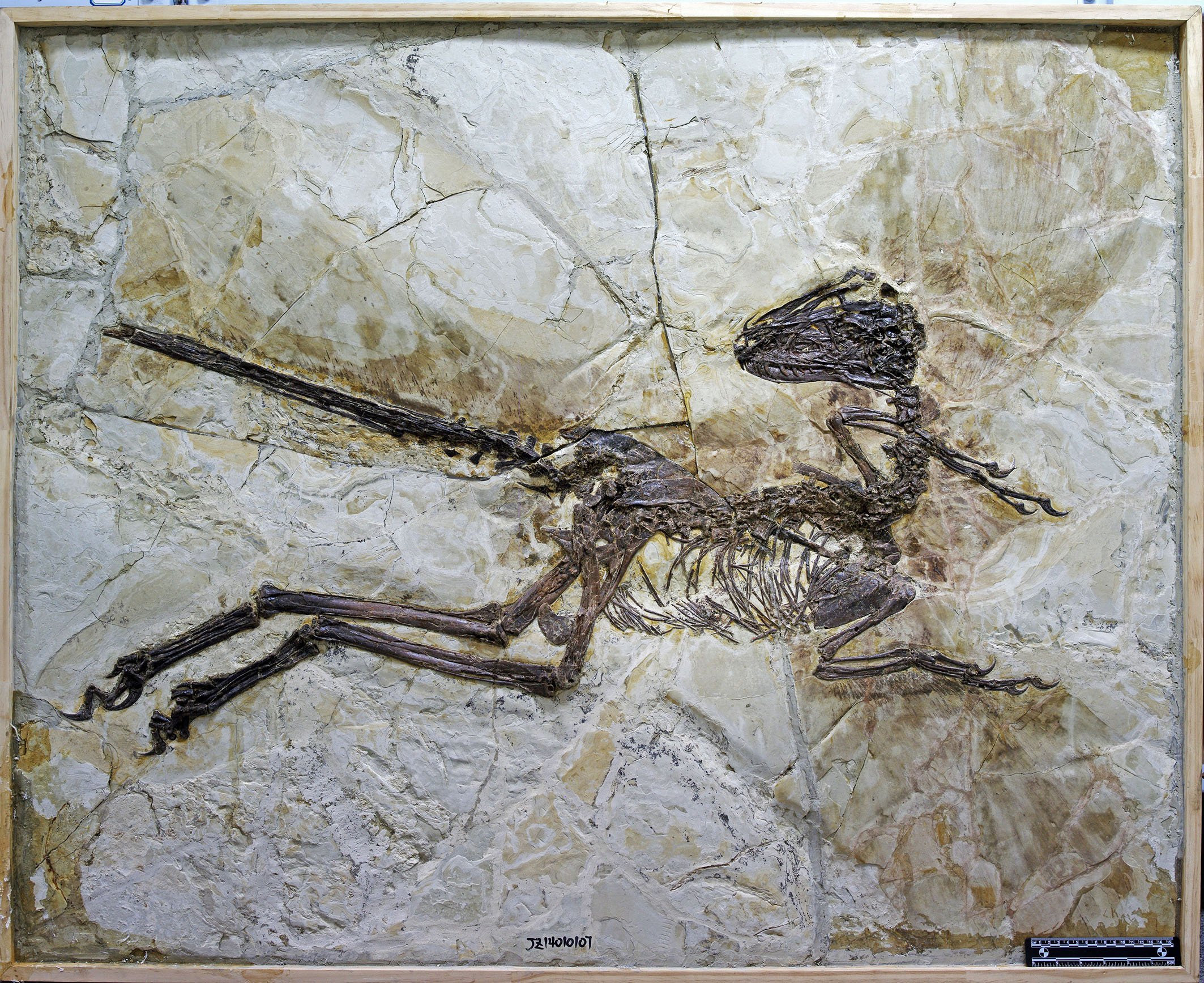 BEIJING — Around 125 million years ago, a mule-sized dinosaur with a long tail and short, resplendently-feathered wings roamed a corner of what is now northeastern China.

Researchers revealed the discovery of Zhenyuanlong suni, a close relative of its far more famous cousin — the velociraptor, after publishing a photo of a remarkably preserved fossil.

The relic shows the complete skeleton of the animal, as well as its skull displayed in profile. Clearly visible around the creature’s short arms are a pattern of long feathers, which also appear to have decorated the dinosaur’s tail.

“The cool thing here is that it is a dinosaur that looks a lot like a bird,” says Stephen Brusatte, a Scotland-based paleontologist who is one of the co-authors of the report.

The discovery has left scientists with a question.

“This is the first time that we have wings found on a dinosaur this big with short arms. There’s no way it could fly,” Brusatte explains, in a phone interview with CNN.

“That raises a big mystery. Why did dinosaurs evolve wings?”

A farmer who has asked to remain anonymous first found the Zhenyuanlong fossil in China’s Liaoning province.

For nearly twenty years, this area has been fertile ground for dinosaur discoveries.

It’s where the first solid evidence proving dinosaurs had feathers was found in 1996, says Xu Xing, a paleontologist at the Chinese Academy of Sciences in Beijing.

The region’s unique volcanic activity in the Early Cretaceous Period is believed to have preserved fossils far better than in other parts of the world.

Xu – himself an accomplished dinosaur hunter who claims to have discovered more than 50 new species – says Zhenyuanlong will help scientists determine how dinosaurs first began to fly.

Why would dinosaur need wings?

In their report, Brusatte and his co-author Junchang Lu were left speculating why a flightless, two-meter long animal would have needed wings.

“It may be that such large wings comprised of multiple layers of feathers were useful for display purposes,” they wrote in Thursday’s issue of the journal Scientific Reports, where the discovery was announced.

The wings may have also helped the dinosaur glide for indeterminate distances.

Artist Chuang Zhao worked with the scientists to paint a vivid depiction of what Zhenyuanlong may have looked like.

The painting depicts the beast dashing through a prehistoric forest, with sharp talons on its front and back legs emerging from a luxurious coat of feathers.

Spurred by growth in the funding of scientific research, China has become a treasure trove for dinosaur hunters in recent decades.

The Chinese word for dinosaur is konglong, which also translates as “terrifying dragon.” The dragon is a potent symbol in Chinese culture.

It is not surprising that co-author Lu added the dragon suffix “long” to the name of his newest feathered discovery.

“We believe it is nice to put some Chinese color on these dinosaurs,” explains Xu, the Beijing-based paleontologist. He says he has also called several of his own dinosaur discoveries “dragon.”

“We are proud that there were some ancient animals living here on this land,” Xu says.