Virginia Beach, Va. - A woman who said she was the wife of a man who crashed into Stumpy Lake returned to the scene on Wednesday afternoon and hugged and thanked one of the men who tried to save him.

The woman happened to be driving by as NewsChannel 3 interviewed Marcus Leggett. The two held for a long hug. The heart wrenching moment left Leggett trying to explain what happened Tuesday morning. "We just didn't do enough I guess. We tried," Leggett said. "He's with God now."

A preliminary investigation revealed that the around 10:00 a.m. Tuesday morning, a 2012 Acura driven 53-year-old The crash remains under investigation was exiting the Stumpy Lake Golf Course and going over the causeway when the car crossed the center of the road and went over an embankment.

The car hit a steel post and safety wire, which then caused the vehicle to flip over into the lake with Stanisci trapped inside.

Leggett says he and Jeremiah Williams took action to try and save Stanisci but weren't able to do it.

Williams was fishing  when he heard screams for help.  He saw the car flipped over and partially submerged in the water.

He quickly called for help. 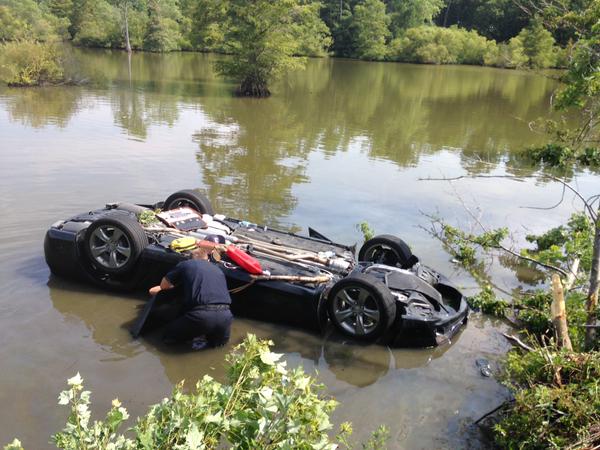 When crews arrived, they found the vehicle in the water, upside down. Rescuers were able to get Stanisci out of the vehicle. He was taken to a local hospital with life threatening injuries and later died as a result.

Williams says his training as a former Marine kicked in and he jumped into the water to help.

"I didn`t really think about nothing. My only objective was trying to get the guy out, get him loose," says Williams.

After getting Stanisci out of the water, crews started to contain fuel that was in the water and remove the vehicle.

The Medical Examiner has ruled Stanisci's death an accident. They say his death was due to drowning.