Portsmouth, Va. - Two Portsmouth homes were searched Thursday morning as part of an investigation into illegal weapons possession. Kenneth Meeks, 26, and his father, 42-year-old Kenneth Matthews were both charged and arrested.

Portsmouth City Councilman Danny Meeks says Kenneth Meeks is his nephew. He says he is shocked by the news, but he does not keep in contact with him that often.

Agents from the Bureau of Alcohol, Tobacco, Firearms and Explosives, the Drug Enforcement Administration, and Virginia State Police were on scene all morning at both of the properties -- one in the 600 block of Normandy Street and one in the 100 block of Yorkshire Road.

Meeks was arrested at his Normandy Street home and NewsChannel 3 was there as his father, Matthews, was escorted out of his Yorkshire Road home in handcuffs and placed inside a vehicle.

Court documents revealed that Meeks was being investigated for federal firearms violations.

According to the affidavit, law enforcement sources received information from several confidential sources that Meeks and  Matthews were in possession of 30-40 firearms and ammunition, including suspected firearm suppressors and homemade machine guns.

At one point during the investigation, surveillance agents followed Meeks to a property in Suffolk where he and a person identified as "J.B." discharged several different handguns and long guns.

Agents came to the conclusion that "J.B." did not require further surveillance because he was not in possession of any illegal firearms.

Meeks also met with an undercover ATF agent in late June to buy scrap/auto metal parts. During the sale, the agent was able to engage Meeks in a conversation about firearms and the sale of a rifle was negotiated. Meeks then led the agent directly to his residence where he retrieved the rifle, a black rifle case, a scope and a 30-round magazine. The rifle and accessories were sold to the agent for $700.

A neighbor at Meeks' Normandy Street home says she heard agents trying to get inside the home around 6:00 a.m. Thursday morning.

"It sounded like two loud explosions. It woke me up," says neighbor Beatrice Hinton.

Hinton says she knows the family in the home and she's surprised by the situation.

"If anything bad has happened, I'm sorry for them," she says. "Because they're good neighbors. They've been good neighbors to me."

Agents and officials at both locations were seen removing boxes and bags of items from the homes.

NewsChannel 3 tried to speak with Meeks, but he did not answer our questions and put a pillow over his face as he left the Norfolk Federal Court House.

The judge gave him bond. 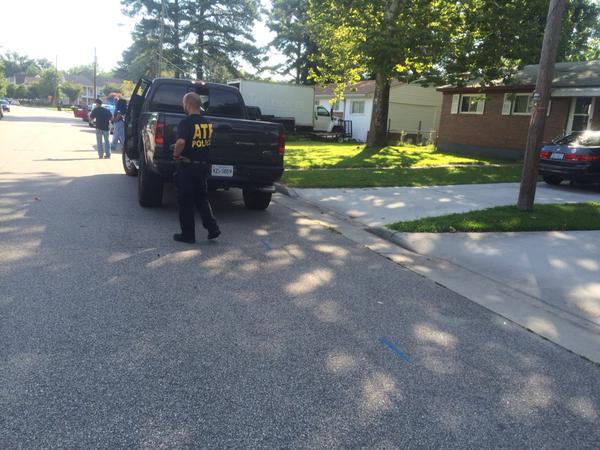