These robberies started in March 2015.

They say all of the incidents occurred on Wednesdays between noon and 3 p.m. and that the suspect was actually polite and apologetic before leaving the scene.

They say he is not concerned if customers are inside at the time and carried a black, single strap backpack with him during a three of the robberies.

Police are trying to predict where he'll hit next.

They are hoping you can help to put him behind bars before that happens.

The man believed to be responsible is described as a black male who has a light complexion. He is about 35-55 years of age and stands 5'8" to 6'0". He weighs around 175-200 pounds and wears a mask covering his face, plastic gloves and is armed with a black semi-automatic handgun with a silver stripe. 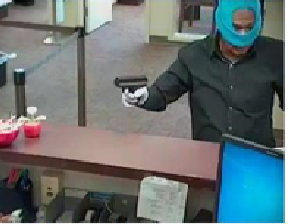 Police say they believe the man is following a specific pattern made from his past robberies. They say they expect this man to rob another bank between September 10th and October 1st.

If you know anything about any of these robberies, please call the Crime Line at 1-888-LOCK-U-UP.