Meet the lawyer who now pays his rent in Legos

Even if you’re not familiar with Nathan Sawaya’s name, chances are you know his work. They’re those big, beautiful artworks made of Lego bricks.

Sawaya never went to art school, and he didn’t anticipate making a living from a children’s toy. Before he became a world-renowned artist, he was a corporate attorney in New York. At the end of long days, he found himself desperate for a creative outlet.

“I would come home at night and take on a project, like drawing or painting, or sculpting out of clay,” he recalls. Then, the idea came to him to try using Lego bricks. Soon, he found he was spending almost as much time working on his sculptures as he was at his day job. He set up a website and started to take commissions.

“It was actually when my website crashed from too many hits that I realized, ‘okay, there’s something to this.'”

Not long after that, he quit his job to pursue his art full-time.

“I decided to follow my dream, but it was a very hard transition,” he admits.

“I was coming from this very secure lifestyle of a six-figure salary, health insurance and all the benefits that came with being an attorney. To what? To a bohemian lifestyle where I didn’t know if I was going to work, or be able to pay rent the next month.”

It’s a gamble that has since paid off. He’s traveled the world via The Art of the Brick, his global touring exhibition, which has showed in over 70 cities across five continents.

For Sawaya, one the pieces that hits home the most for him is a work called Grasp, in which a figure is pulling away from a wall and several arms are trying to hold him back. 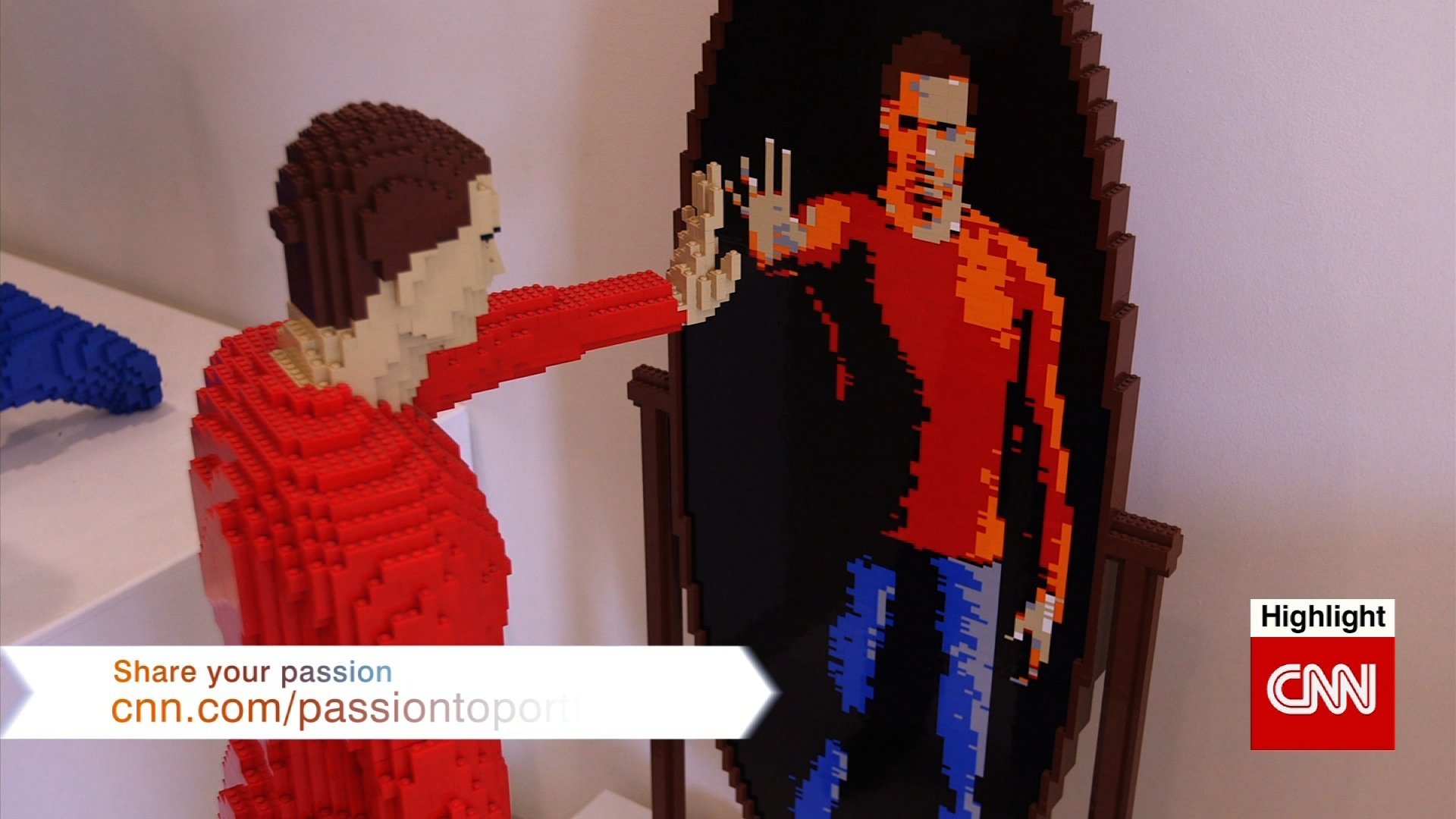 “It really sums up my story,” he says. “All those arms are the negativity I heard when I was trying to be an artist.”

Sawaya says that though he was fortunate to have close friends and family support the drastic change in his life, there were others that were less enthusiastic.

“There were some friends who were really negative and thought I was making a huge mistake… so that was tough,” he notes. As a result, he says he tries to stay positive around others facing similar transitions.

“You really have to cut all that negativity out. You can’t have it around you to make it work.”

While it took a while for Sawaya to realize his true calling, there were clues that he might one day become the world’s premier Lego artist.

“When I was 10, I wanted to get a dog, but my parents said no. So what did I do? I built my very own life-sized dog out of Lego,” he recalls.

His parents were so encouraging that they even let him have perhaps his earliest installation — a 36-square-foot city built of Lego — behind their couch in their living room.

“It was a bit of a conversation piece. Back there, I could have my own adventures with Lego.”

Aside from the obvious signs of having “made it” (a 50-foot billboard in Times Square, meeting presidents, rock stars and celebrities), Sawaya says his most successful moment came at a book signing, when he was approached by a little boy bearing his own Lego creation.

“It was a model of one of my sculptures, and he was sharing it with me, saying he was so inspired by my work that he built his own version of it. Moments like that are hard to bottle up. They’re so surreal, in fact. It’s so special when you know you’re inspiring others.”