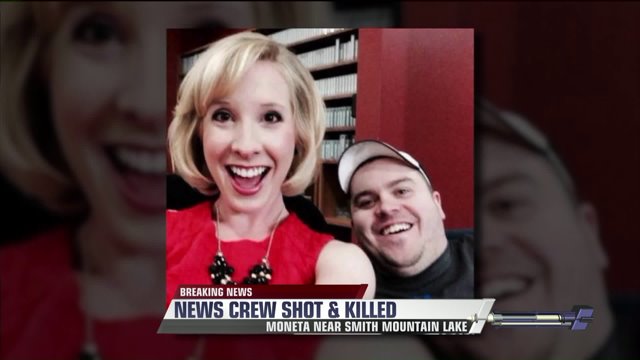 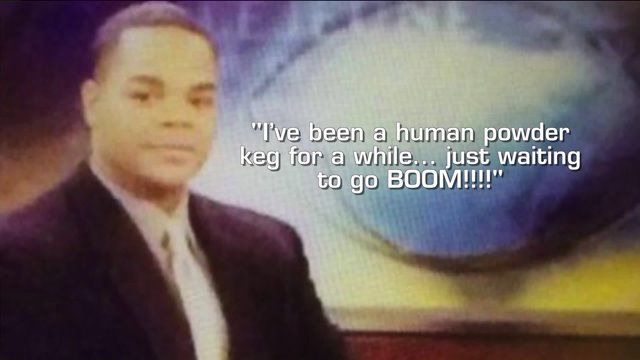 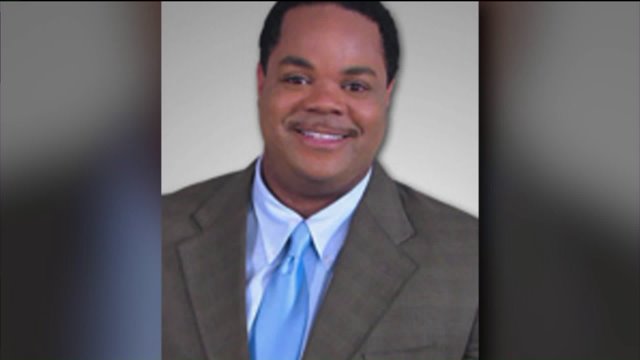 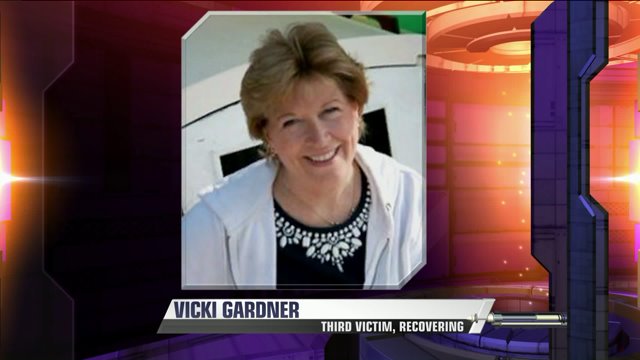 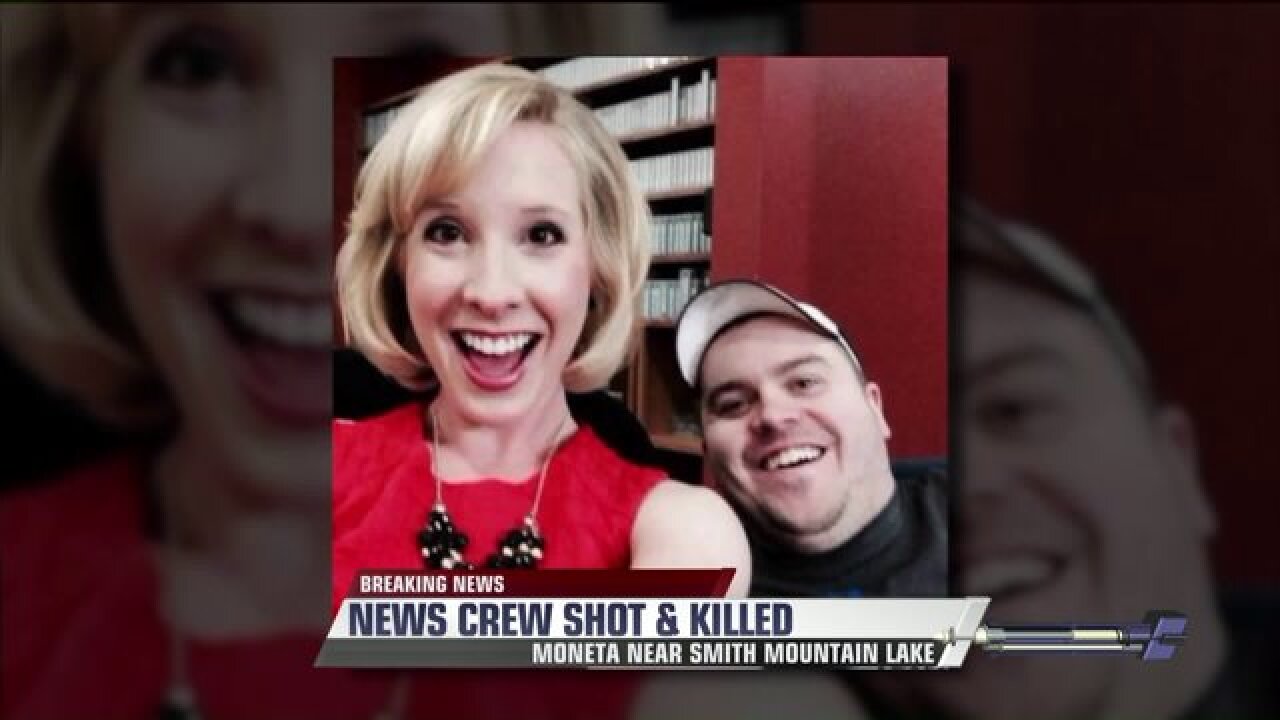 Police say the suspect was 41-year-old Vester Lee Flanagan. He is a former reporter at WDBJ that went by the name Bryce Williams.

The shooting occurred at Smith Mountain Lake in Moneta, Virginia.

Flanagan was pursued for several hours before reportedly shooting himself on I-66 in Fauquier County. He was taken to the hospital before being pronounced dead several hours later.

A timeline of the events are detailed below:

Screengrab of shooter, believed to be Vester Flanagan, aka Bryce Williams

During a live interview at 6:45 a.m. from Bridgewater Plaza at Smith Mountain Lake, approximately eight gunshots were heard as reporter Alison Parker is seen interviewing someone on screen. The camera, held by photographer Adam Ward, then drops to the ground and the broadcast cuts back to the anchor desk.

The video captures an image of the what's believed to be the suspected shooter before it cuts away.

A short time later, WDBJ confirmed that Parker and Ward were killed in the shooting. Parker was 24.  Ward was 27.

Both grew up in Southwest Virginia. Parker was a 2012 graduate of James Madison University and was dating a anchor Chris Hurst at WDBJ. He described her in an interview with NewsChannel 3's Gabriella Deluca

"She is inside and out the most beautiful woman I’ve ever met, and I was lucky enough to call her my girlfriend,” says Hurst who announced that the two had been dating for the past nine months.

She was the most radiant woman I ever met. And for some reason she loved me back. She loved her family, her parents and her brother.

Ward was a 2011 graduate of Virginia Tech and engaged to a morning show producer at WDBJ.

It is with extreme sadness that we report WDBJ7's Alison Parker and Adam Ward were killed in an attack this morning. http://t.co/oC9s4vLJXV

We love you, Alison and Adam. pic.twitter.com/hLSzQi06XE

The woman being interviewed, Vicki Gardner, executive director of the Smith Mountain Lake Regional Chamber of Commerce, was shot in the back and was taken via ambulance to Carilion Roanoke Memorial Hospital where she is currently in good condition.

In a news conference on Wednesday afternoon, Franklin County Sheriff Bill Overton said Flanagan left the scene of the crime and drove his 2009 Ford Mustang to the Roanoke Regional Airport. He then left the airport in a Chevrolet Sonic that he rented earlier in the month. The Mustang has been recovered as evidence.

Flanagan then led them on a pursuit for several minutes before he ran off the road and crashed into the median.

When troopers approached the vehicle, they found Flanagan suffering from a self-inflicted gunshot wound. He was flown to a Inova Fairfax Hospital where he died around 1:30 p.m., the Franklin County Sheriff's Office said in a news conference.

Suspect's car crashes on side of road

Suspect's car crashes on side of road

He appears to have posted several times to Twitter and Facebook accounts under the name Bryce Williams as he was being pursued. He made a series of tweets alleging several work-related issues with Parker and Ward and also included a graphic video showing the shooting from his perspective. The Twitter account and Facebook account were quickly removed.

The WDBJ station manager says Flanagan had previously sued the station for discrimination in 2014. He also filed a discrimination lawsuit against an NBC affiliate in Tallahassee in 2000.

The #WDBJ shooting suspect's name is Vester Lee Flanagan, not Lester as reported by other outlets: http://t.co/0wWbFcVlbX

ABC News reports sometime overnight, they received a 23-page fax from someone who says he is Bryce Williams that they have turned over to authorities.

They also report that someone claiming to be Bryce Williams called ABC News around 10:00 a.m. and said that his real name was Vester Lee Flanagan, that he shot two people, and that he was being pursued.

ABC News has released some of the details in the 23-page fax. The writer claims that the shooting was triggered by the Charleston church shooting that occurred in June.

“What sent me over the top was the church shooting. And my hollow point bullets have the victims’ initials on them."

In this document, Flanagan also says "I've been  human powder keg for a while just waiting to go BOOM."

He says he was influenced by other mass shooters.

WDBJ held a news conference about the incident on Wednesday evening. General Manager Jeff Marks, Flanagan complained to Human Resources while he was there.  He says they went though internal investigations and staff members saw him around town but did not know if he'd landed a job.

"We are people with feelings. People are around the newsroom hugging and taking care of each other. I don't tell journalists how to do their jobs," says Marks.

WDBJ also says they tried to put programs in place to help Flanagan, but that did not help the situation.

"It has been very difficult. Our viewers got to see. Our anchors got to see it. The producer kept working after seeing her fiance shot. It's tough. I've never dealt with anything like this," says News Director Kelly Zuber.

Flanagan's family members released a statement saying that their thoughts and prayers are with the families of the victims, and with the news station, CNN affiliate KRON reported. "Words cannot express the hurt that we feel for the victims. Our family is asking that the media respect our privacy," the statement read.

Memorial outside of WDBJ tonight. pic.twitter.com/QaPGDLLUbh

Large group praying outside @WDBJ7 Prayers are lead by a local pastor pic.twitter.com/bnGmjfVSN3

Who was Vester Flanagan/Bryce Williams?

WDBJ Anchor/Boyfriend of slain reporter: “The last thing she said to me was ‘goodnight sweet boy'”