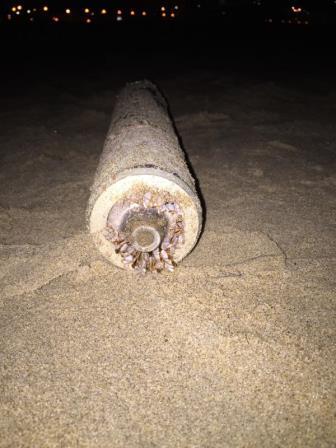 Virginia Beach, Va. – The Virginia Beach Police Bomb Squad responded to 13th Street at the Oceanfront around 3:00 a.m. Friday morning in response to a Mk25 phosphorous marine marker that had washed ashore.

The Mk25 is used for marking reference points using both smoke and flame, according to the Army. They’re launched by hand or from aircraft or surface ships.

The beach was vacant of pedestrians due to the early morning hour, but a perimeter was set up around the Mk25 and it was recovered.

The marker was taken to Special Operations for disposal.

VBPD remind citizens that items do wash up on the beaches from time to time.  If you see something odd, especially man-made, do not touch it.