UPDATE: Police have arrested 23-year-old De’Trel Dwight Winstead of Virginia Beach in the carjacking of the HRT mini bus.

Several Crime Solvers tips helped police identify Winstead, and he was located and arrested at a Norfolk hotel. Winstead was charged with Abduction, Robbery and Grand Larceny and is being held in the Virginia Beach Correctional Center without bond.

Virginia Beach, Va. – A search is underway in Virginia Beach for a person who stole a mini Hampton Roads Transit bus, took it for a ride and then ditched it an an intersection before running off.

The bus was stolen around 8:08 a.m. when it was stopped at 1025 College Park Boulevard in the Jamestown Commons area.

The suspect, believed to be a juvenile, approached the bus and demanded a ride but the driver denied him access.

NewsChannel 3 has learned that the bus is contracted out to take disabled people to medical appointments, and one person on the bus was in a wheelchair.

When the bus driver exited the bus to take the wheelchair ramp down for the passenger, the suspect jumped on the bus and drove off.

The suspect drove about a mile, stopped the bus at Level Green Boulevard and Drew Drive, and ran off.

“That scares me because I don’t know how I’d recover from that, so I really feel bad about this and really worried about it,” says Jasmine Rawlins, the Director of College Park Daycare down the street from the incident.

Police say the passenger took action to turn the bus off and waited for police.

“She was fantastic. Did everything you could possibly expect under the circumstances, very proud of her,” says Tom Holden, the Public Information Officer.

The passenger on the bus was not injured.

The suspect is described as a black male, mid to late teens, thin build, wearing only blue jeans.

HRT has provided several surveillance images of the suspect taken from the bus camera. 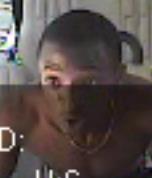 Anyone with information on the identity of this person is asked to call the Crime Line at 1-888-LOCK-U-UP.