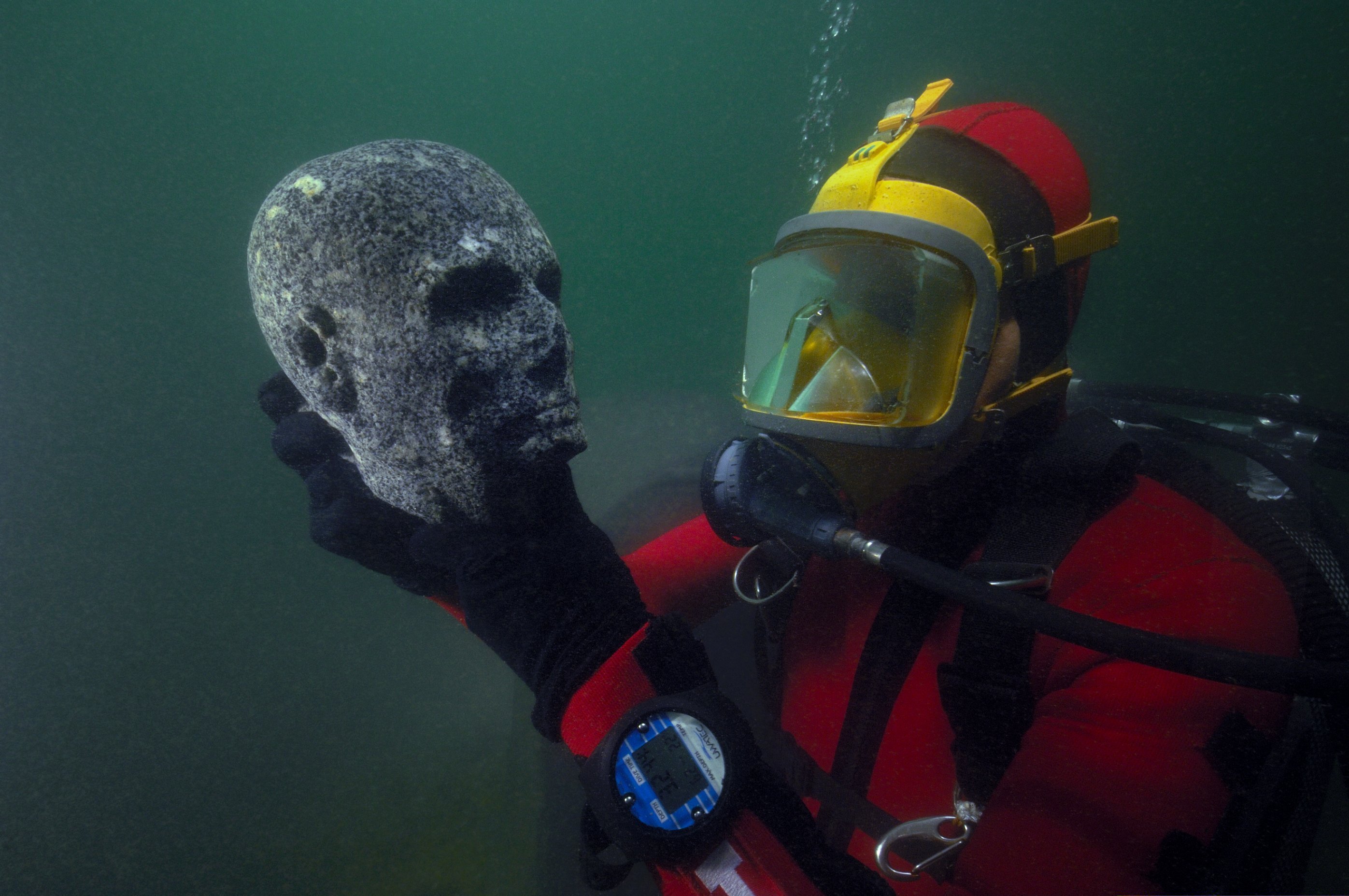 (CNN) — An incredible selection of Egyptian treasures from previously lost ancient cities has resurfaced in Paris.

Submerged for well over a thousand years, around 250 artifacts from the ruins of Thonis-Heracleion and Canopus are shown to the public for the first time in an exhibition at the Arab World Institute.

The cities were once thriving ports on the Egyptian coast but were sunk by natural disasters in the 8th century AD.

They only survived in obscure historical texts, until their rediscovery by French archaeologist Franck Goddio in 2000.

Since 1992, Goddio — who founded the European Institute for Underwater Archaeology — has been working closely with Egyptian authorities and, later, with the Oxford Centre for Maritime Archaeology to reveal more of the cities located on the seabed of the Aboukir Bay near Alexandria.

“From the very beginning, the project of locating the cities of Thonis, Heracleion and Canopus was presented to the Egyptian authorities along with the proposal for the research in Alexandria’s Portus Magnus. My initial idea was to have a completely comprehensive approach to all the possible sunken sites of the western part of the delta of the Nile because those three cities had relationships with each other,” Goddio told CNN.

Following clues from ancient texts, Goddio undertook the mammoth task of attempting to locate all possible submerged sites along the western part of the Nile delta.

His research suggested the cities were geographically dependent and therefore situated near each other. But then he had to prove it.

“There were three kinds of major challenges in rediscovering these sites. First, the area of survey was huge — 110 square kilometers (11,000 hectares),” he explains.

“Second, we had no land references in Aboukir Bay. Whereas in Alexandria we could rely on fixed and known markers on the coast, such as, for example, the prior position of the obelisks called Cleopatra’s Needles.

“Third, the accumulation of marine sediment and Nile silt over the whole area buried the remains of the sites and the poor visibility in the water made visual reconnaissance survey impossible.”

His passion spurred him on and eventually, fifteen years ago, Goddio and his team located the long lost cities.

“That situation was further reinforced when, after the rediscovery of Heracleion, we could prove that it was the same city as Thonis: Heracleion was the Greek name, Thonis the Egyptian name. Furthermore, surveys and excavations revealed that a 3.5 km long canal linked Thonis-Heracleion and Canopus. The Canopic canal appears to have been the extension of this waterway towards Alexandria.”

Despite spending the last 15 years excavating the lost cities, Goddio says there is still much to be done.

“A couple of years ago I said we had found 5% of Heracleion, but we discovered that the town covered another town so I have to divide that by two. It’s like Pompeii, which was discovered in the 18th century and still under excavation. Heracleion and Canopus are just as big as Pompeii, plus they’re underwater.”

A tale of good and evil

The exhibition in Paris, entitled “Osiris, Sunken Mysteries of Egypt,” explores the importance of the Egyptian god to people of these cities, which are thought to have been places of pilgrimage.

The story of Osiris tells of how he was murdered and cut up by his brother Seth before being resurrected by his wife (and possibly sister) Isis, with whom he had a son, Horus.

Goddio says: “It’s about good defeating evil but not conquering it completely. Every year they had to renew Osiris, who brought the cycle of abundance, the stability of the cosmos and the continuity of the dynasty. In every temple a priest would represent the pharaoh and relive the murder, dismemberment and rebirth of Osiris. We knew that there was something special in Heracleion thanks to the stele rediscovered in 1881 which bore the decree of Canopus.

“It said that in the celebration of the Mysteries of Osiris, the great god leaves from the temple of Amon-Gereb in the town of Heracleion to perform a processional navigation to his sanctuary of Canopus. We found the canal along which the god sailed. We found artifacts in bearing witness of this celebration.”

Among the artifacts shown to the public for the first time are remarkable bronze statues and gold laden treasures, as well as complimentary pieces on loan from the Cairo Museum.

“(My favorite piece on display) is the stele of the Decree of Nectanebo I, which was discovered intact under a wall of the temple of Amon Gereb,” selects Goddio.

“It solves an ancient enigma: Thonis and Heracleion are one city and the same, a fact that was not known even by Strabo (the Greek philosopher), though he visited the region when he lived in Alexandria for three years around 26 BC.”

The exhibition, “Osiris, Sunken Mysteries of Egypt,” begins September 8 and runs until January 31, 2016.

Sophie Eastaugh contributed to this story.